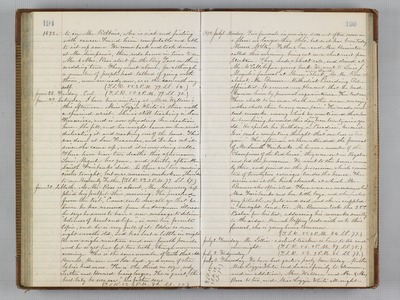 1872. to see Mr. Robbins, who is sick and failing with cancer. Found him comfortable and able to sit up some. We came back and took dinner at Mr. Simpson's, then rode home in time to see Mr. & Mrs. Ross start for the Big Trees on their wedding tour. They went alone, for although a number of people had talked of going with them, none are ready now, as is the case with myself. (T.S.R. 55. 2 P.M. 79.S.S. 62.) June 28. Friday. Cool. (T.S.R. 50. 2 P.M. 79. S.S. 70.) June 29. Saturday. I have been visiting at Mrs. Wallace's this afternoon. Miss Lizzie white is there with a sprained wrist. She is still teaching in San Francisco, and is now spending her vacation here. She fell, and her weight came on her wrist dislocating it and cracking one of the bones. This was done at San Francisco, and Dr. has set it since she came up, and it is now doing well. There have been two deaths this afternoon. Louis Megerle has gone, and shortly after Mr. Smith Fairbanks died. So there are two morning circles tonight, but ours remains unbroken, thanks to our Heavenly Father. (T.S.R. 52. 2 P.M. 77. S.S. 67.) June 30. Sabbath. As Mr. Ross is absent, Mr. Guernsey supplied his pulpit this morning. He preached from the text, "Come into me all ye that" etc. Since he has recovered from his dangerous illness he says he seems to have a new message to deliver "holiness of heart and life," is now his favorite topic, and he is very full of it. Eddie is now eight months old, and has lost a little in weight. He now weighs nineteen and one fourth pounds and he as yet has but two teeth, though more are coming. This is the same number of teeth that Ada Howard, Horace and Ida had, and none of the babies had more. He is the third in size, only Luther and Howard being larger, He is quiet, "the best baby he ever saw," his father says. (T.S.R. 52. 2 P.M. 80. S.S. 70.) 1872. July 1. Monday. Two funerals in one day do not often occur in a place no larger than this, but so it has been today Messrs. McStay. Father & Son and Mrs. Humiston, called this morning, being out on a short visit from Stockton. They made a short call, and dined at Mr. McCall's before going back. We went to Louis J. Megule's funeral at eleven o'clock in our church. As Mr. Ross is absent, Mr. Bremer. Methodist Presiding Elder officiated. It seemed very pleasant that he had known him by personal acquaintance. His text was, "There shall be no more death, neither sorrow, nor crying neither shall there be any more pain. "He made excellent remarks, among which he mentioned that, had he been living, he would this day have been twenty nine yrs. old. "He spends his birthday in "Paradise," he said. It is such a comforting thought that "our loss is his gain." This afternoon we have attended the funeral of Mr. Smith Fairbanks. As he was a member of the "Champions of the Red Cross," they were out in Regalia and led the procession. We went to the house, or nearby there, and joined in the procession, which consisted of twenty two carriages besides the hearse. The service was at the brick church, at which Mr. Bruner also officiated. There were no mourners but Mrs. Fairbanks and her little boys, and she looked very pitiable, so pale and sad, and she is crippled in her right hand too. Mr. Bruner took the 23rd. Psalm for his text, addressing his remarks mostly to the widow. Hannah Geffroy rode with us to this funeral, she is going home tomorrow. (T.S.R. 55. 2 P.M. 84. S.S. 77.) July 2. Tuesday. Mr. Lillie - a school - teacher is here to tea and over night. (T.S.R. 56. 2 P.M. 87.S.S. 78.) July 3. Wednesday. (T.S.R. 58. 2 P.M. 86. S.S. 77.) July 4. Thursday. We have had quite a party here today. Mother Miss Lizzie White and Susie's family to dinner, and in addition, Mr. Wallace and Mr. & Mrs. Ross to tea, and Miss Lizzie White all night. (T.S.R. 52. 2 P.M. 83. S.S. 70.)