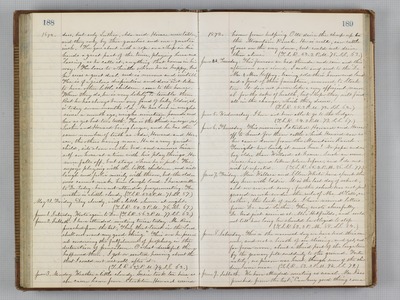 1872. does, but only Luther, Ada and Horace were taller, and they only by thee quarters and one-quarter inch. He goes about with a rope or a whip in his hands a great part of the time, playing horse and "lassing" as he calls it, anything that comes in his way. He loves to whistle when he is happy, but he cries a great deal and is nervous and irritable. He is of a jealous disposition and does not like to have other little children come to the house. When they do, he is very likely come to trouble them. But he has always been very fond of baby Eddie, who is today seven months old. He has lost in weight since a month ago, weighs nineteen pounds and has as yet but two teeth. He is the third in size, only Luther and Howard being large, and he has the same number of teeth as Ada, Howard and Horace, the others having none. He is a very quiet child, sits alone on the bed and amuses himself an hour at a time with his play things. He never falls off, but stays where he is put. He enjoys playing with the little children, and will laugh and frolic merrily with them, but the older ones cannot make him laugh loud. I have written to Dr. - today - have not attended prayer meeting. The weather is a little cloudy. (T.S.R. 52. 2 P.M. 71.S.S. 57.) May 31. Friday. Day cloudy with a little shower at night. (T.S.R. 50. 2 P.M. 76. S.S. 67.) June 1. Saturday. Wrote again to Dr. (T.S.R. 56. 2 P.M. 77. S.S. 62.) June 2. Sabbath. I have attended meeting twice today. Mr. Ross Preached from the text, "They that trust in the Lord shall not want any good thing." This eve he preached concerning the fulfilment of prophecy in the destruction of Jerusalem. O what dreadful things happened then. I got so excited hearing about them that I could not rest well after it. (T.S.R. 52. 2 P.M. 74. S.S. 62.) June 3. Monday. Weather a little cloudy. Susie took tea hire as she came home from Stockton. Howard arrived 1872. home from helping Otto drive the sheep up to the Mountain Ranch. He is well, saw cattle of ours on the way down, but could not drive them alone. (T.S.R. 52. 2 P.M. 75. S.S. 63.) June 4. Tuesday. This forenoon we had thunder and rain and this afternoon was cloudy. I wrote and sent to the Dr. Mr. & Mrs. Geffroy, having sold their house and land and a part of their furniture, removed to Stockton. It does not seem like a very efficient removal for the sake of health, but I hope they will find all in the change, which they desire. (T.S.R. 55. 2 P.M. 72. S.S. 62.) June 5. Wednesday. I have not been able to go to the Lodge. (T.S.R. 54. 2 P.M. 73. S.S. 67.) June 6. Thursday. This morning I started Howard and Horace off to hunt for those cattle which Howard saw as he came down from the Mountain Ranch. Tonight how lonely it seems here! No papa and no boy older than Willard at home. Such an occurrence has never taken place before, and I do not wish it repeated. (T.S.R. 55. 2 P.M. 86. S.S. 77.) June 7. Friday. Mrs. Wallace and Ellen White have spent the day here with Eddie. It is the last day of school, and we are not sorry, for the school has not progressed much under the rule of Mr. McCall, or rather, the lack of rule. I have received letters from Dr. and Luther. They wrote cheerfully. Dr. had just arrived at Mr. Hetfields, and could not tell how long he should be obliged to stop. (T.S.R. 62. 2 P.M. 88. S.S. 84.) June 8. Saturday. This is the warmest day we have had this summer, and not a breath of air stirring, and yet, not for from noon, about a third port of the large tree by the granary fell suddenly to the ground. Fortunately, no person was hurt though some of the children were near. (T.S.R. 63. 2 P.M. 94. S.S. 79.) June 9. Sabbath. We have attended meeting as usual. Mr. Ross preached from the text, "Can any good thing come