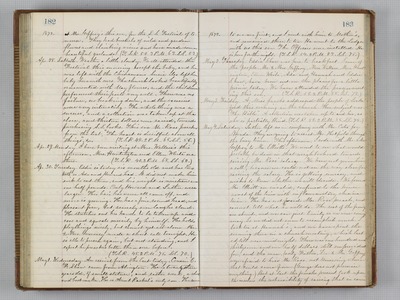 1872. at Mr. Geffroy's this eve, for the S. S. Festival of tomorrow. They had bushels of wild and garden flowers and climbing vines and have made some beautiful garlands. (T.S.R. 50. 2 P.M. 63. S.S. 53.) Apr. 28. Sabbath. Weather a little cloudy. We all attended the Festival this morning except the baby, and he was left with the Chinaman Susie also left her baby here with ours. The church looked beautifully ornamented with May flowers, and the children performed their parts very well. There was no failure, no breaking down, and the exercises were very interesting. The whole thing was a success, and a collection was taken up at the close, and thirteen dollars were raised, towards purchasing S. S. books. This eve Mr. Ross preached from the text, "The heart is deceitful above all things," etc. (T.S.R. 48. 2 P.M. 65. S.S. 56.) Apr. 29. Monday. I have been visiting at Mrs. Wallace's this afternoon. Mrs. Huntington and Ellen White are there. (T.S.R. 40.2 P.M 68. S.S. 62.) Apr. 30. Tuesday. Eddie is today six months old and has two teeth as Ada and Howard had. It did not make him sick to cut them, and his weight is nineteen and one-half pounds. Only Howard and Luther were larger. His hair has never all come off, and more is growing. He has a fine round head, and pleasant face, but scarcely ever laughs aloud. He stretches out his hands to be taken up and coos and squeals merrily by himself. He holds playthings nicely, but cannot yet sit alone, Mr. & Mrs. Guernesy made a short call tonight. He is able to preach again, but not standing, and I expect he preaches better than ever before. (T.S.R. 45. 2 P.M. 75. S.S. 70.) May 1. Wednesday. An arrival from the East today. Cousin E. F. Shaw came from Abington. He is twenty three years old, of small stature, and rather weak, a shoe and boot maker. He is Aunt Rachel's only son. He came 1872. to see me first, and I went with him to Mother's, and remained there to tea. He went to the Lodge, with us this eve. The Offices were installed. He is here for the night. (T.S.R. 54. 2 P.M. 83. S.S. 75.) May 2. Thursday. Eddie Shaw was here to breakfast. Some of the people, Mr. & Mrs. Geffroy, Mrs. Wallace, Mrs. Huntington, Ellen White, Ada and Hannah and Eddie Shaw, have been out on the plains for a little picnic today. We have attended the prayer meeting this eve. (T.S.R. 58. 2 P.M. 85. S.S. 78.) May 3. Friday. A Miss Jacobs addressed the people of Locke ford this evening in the church. Her subject was "The Bible." A collection was taken up to aid her, as she is partially blind. (T.S.R. 58. 2 P.M. 85. S.S. 75.) May 4, Saturday. Luther left us in company with Mr. Cates for Nevada. They are going to assist Mr. Hetfield through the busy time. This afternoon. I rode with Mr. & Mrs. Geffroy to Mr. Elliott's. We went to see what would probably be done in that neighborhood towards raising Mr. Ross' salary. We have not given him a call, because we could not see the way clear for raising the salary. He is getting uneasy, and wishes to know whether we will decide. We found Mr. Elliott an invalid, confined to the house most of the time with inflammatory rheumatism. He has not heard Mr. Ross preach, and cannot tell what he will do. The rest of the family are absent, and we saw just Emily as we were coming away. So we did not seem to accomplish much. I took tea at Hannah's , and we have spent the evening there in a church meeting, which lasted till near midnight. There was one hundred and thirty seven and one-half dollars still unprovided for, and the men. (only Father, Dr. & Mr. Geffroy) were afraid to here Mr. Ross, not knowing where that could come from. (George does not promise anything.) But at last the females present took upon themselves the responsibility of raising that in some