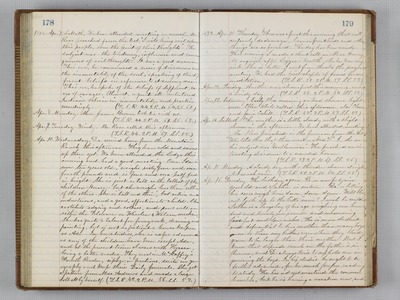 1872. Apr. 7. Sabbath. We have attended meeting as usual. Mr. Ross preached from the text, "I will bring evil upon this people, even the fruit of their thoughts." The subject was the tendency, influence and consequences of evil thoughts." It was a good sermon. This eve, he commenced a series of discourses on the immortality of the soul, speaking of the different beliefs in reference to it among men. This eve, he spoke of the beliefs of different races of savages. Almost, or quite all untutored Indians believe in immortality, and practise accordingly. (T.S.R. 44. 2 P.M. 64. S.S. 61.) Apr. 8. Monday. Mrs. Fames Brown took tea with us. (T.S.R. 44. 2 P.M. 69. S.S. 63.) Apr. 9. Tuesday. Windy. Mr. Ross called this afternoon. (T.S.R. 44. 2 P.M. 67. S.S. 55.) Apr. 10. Wednesday. Dr. arrived home from the Mountain Ranch this afternoon. They have cold and snow up there yet. We have attended the Lodge this evening and had a good meeting. Our Ida is now ten years old, weighs sixty four and one. fourth pounds and is four and one-half feet in height. She is just as tall as the tallest of the children Horace - but she weighs less than either of the others. She is "tall and thin", but active and industrious, and a good, affectionate child. She crotchets edging and collars, and sews well on either the Florence or Wheeler & Wilson machine. She has quite a talent for fancy work, drawing and painting, but is not so patient a house keeper as Ada. In her studies, she is as far advanced as any of the children have been except Ada, and at the present time classes with Horace, being a better reader. They read in McGuffey's Fourth Reader, cipher in fractions, recite in geography and keep their Daily formals. She got a pattern from Mrs. Andrews and made a large doll all by herself. (T.S.R. 42. 2 P.M. 56. S.S. 53.) 1872. Apr. 11. Thursday. There was a frost this morning that will certainly do damage, because fruit buds and other things are so forward. The day has been windy. This evening I made a short call on Mrs. Harvey to engineer after Lizzie's health who has been very sick. She is better. I want from thereto the prayer meeting. We had the first chapter of James for one meditation (T.S.R. 38. 2 P.M. 59. S.S. 53.) Apr. 12. Friday. Another unwelcome frost this morning, and a windy day. (T.S.R. 38. 2 P.M. 64. S.S. 53.) Apr. 13. Saturday. Early this morning we had showers light ones. Ellen White called this afternoon, also Clara and Josie Cahill. (T.S.R. 42. 2 P.M. 59. S.S. 53.) Apr. 14. Sabbath. The weather is a little cloudy with a slight shower in the afternoon. We have attended meeting Mr. Ross preached in the forenoon from the text. "Who told thee that thou wart naked?" In the eve. his subject was "Hoodlumism". He preached an interesting discourse to a crowded house. (T.S.R. 39. 2 P.M. 67. S.S. 56.) Apr. 15. Monday. A cloudy day with a thunder shower at night. Not much rain. (T.S.R. 50. 2 P.M. 64. S.S. 58.) Apr. 16. Tuesday. The birthday again. Dr. is now forty nine years old and Luther is sixteen. Dr. is letting his cares weigh him down, down, down. Will he not look "up to the hills " more? I wish he could. Luther is a large boy of his age weighing one hundred and twenty one pounds and measuring five feet and four inches. He is more obedient and deferential to his mother than many boys more so than my brothers were when they had grown to be larger than their mother. But I know that depends much on the father's influence, and Dr. always tries to up hold me in governing the boys. In his studies he ought to be farther advanced, for he much prefers reading to study. He has not yet mastered the common branches, but he is having a vacation now, and