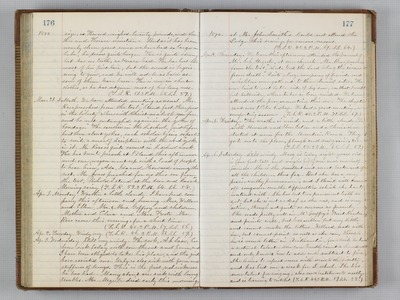 1872. size, as Howard weighed twenty pounds, and Luther and Horace nineteen. But as it has been nearly eleven years since we have had so large a babe, he seems quite large. He is quite strong but has no teeth, as Horace had. He has lost the most of his first hair, but the second is beginning to grow, and he will not be as bald as some of them have been. He is now in short clothes, as he has outgrown most of his long ones. (T.S.R. 51. 2 P.M. 65. S.S. 57.) Mar. 31. Sabbath. We have attended meeting as usual. Mr. Ross preached from the text, "Stand fast, therefore in the liberty where with Christ maketh you free and be not entangled again in the yoke of bondage. "The exercise in the S. school, just before, had been about yokes, each scholar being expected to recite a verse of Scripture with the word "yoke" in it. Mr. Ross is quite earnest in S. school work. He has been to preach at Poland this afternoon and our wagon went up with a load of people to hear him, Ada, Ida and Howard among the rest. Mr. Jones preached for us this eve from the text, "Behold I stand at the door and knock", Morning rainy. (T.S.R. 53. 2 P.M. 64. S.S. 58.) Apr. 1. Monday. Weather a little cloudy. I have had company this afternoon and evening. Mrs. Wallace and Ellen, Mr. & Mrs. Geffroy and children, Mother and Clara and Mrs. Foote. Mr. Ross came this evening, for a short time. (T.S.R. 48. 2 P.M. 67. S.S. 56.) Apr. 2. Tuesday. Windy very. (T.S.R. 46. 2 P.M. 61. S.S. 59.) Apr. 3. Wednesday. Still very windy. The cook, Ah Saow, has been sick today with sore throat and fever, and I have been obliged to take his place, and the girls have assisted me. Baby is also sick with fever and stuffness of lungs. This is the first real sickness he has had. Many about are sick with lung troubles. Mr. Megerle died early this morning, 1872. at Mr. John Smith's. Could not attend the Lodge this evening, for various reasons. (T.S.R. 45. 2 P.M. 69. S.S. 64.) Apr. 4. Thursday. We have this afternoon attended the funeral of Mr. C. J. Megerle, at our church. Mr. Ross preached from the text, "Wrote God the Lord belong the issues from death." Quite a large company of friends and neighbors were gathered to these burial sites. He was laid to rest by the side of his son, on that beautiful hillside, where he has so long resided. We have attended the prayer meeting this eve. The chapter read was I Peter 2. chap. We had a good meeting, a comforting season. (T.S.R. 48. 2 P.M. 71. S.S. 67.) Apr. 5. Friday. The weather is windy and a little cloudy. Dr. with Howard and Ben Eaton and a Chinaman started at noon for the Mountain Ranch. They go to see to the place, plough and row grain, etc. (T.S.R. 50. 2 P.M. 65. S.S. 59.) Apr. 6. Saturday. Still windy. Mary is today eight years old, is four feet tall and weighs fifty one and one half pounds. She is the smallest and most backward of all the children thus far. But she has a very praise worthy perseverance, and I think will come off conqueror over the difficulties which she has to contend with. She has but two permanent teeth as yet, but she is not as deaf as she was, and is very active, though not quite as nervous as formerly. She reads pretty well in McGuffey's First Reader and prints well, but has written but very little and cannot make the letters. Willard reads with her, but cannot print as well as she can, though he is much better in Arithmetic, for which he has a natural talent. She can hardly count a hundred and only knows how to add and subtract to five. She learns to repeat verses with much difficulty, and has but one a week for S. school. She has more talent for singing, also sews patchwork neatly, and is learning to crotchet. (T.S.R. 44. 2 P.M. 59. S.S. 58.)