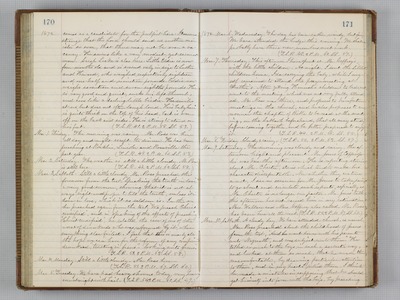 1872. comes as a candidate for the pulpit here. It seems strange that the Lord should send us another minister so soon, that there may not be even a vacancy. He seems like a very modest, yet earnest man. Sarah Locke is also here. Little Eddie is now four months old and is second only in size to Luther and Howard, who weighed respectively eighteen and one-half and nineteen pounds. Eddie now weighs seventeen and seven-eighths pounds. He is very good and quiet, sucks his left thumb, and coos like a darling little birdie. He smiles at us, but does not often laugh loud. His baby hair is quite thick on the top of his head, but is won off on the back and sides. He is strong to stand on his feet. (T.S.R. 41. 2 P.M. 58. S.S. 53.) Mar. 1. Friday. The morning was rainy. Mr. Ross was here all day and night except to dinner. He has been preaching at Rocklin, Lincoln and Roseville the past year. (T.S.R. 49. 2 P.M. 60. S.S. 53.) Mar. 2. Saturday. The weather is still a little cloudy. Mr. Ross is still here. (T.S.R. 48. 2 P.M. 62. S.S. 58.) Mar. 3. Sabbath. Still a little cloudy. Mr. Ross preached this forenoon from the text, "Speaking the truth in love," a very good sermon, showing that it is not always right and proper to tell the truth, unless it is done in love, which it so seldom is. In the eve. he preached again from the text, "We preach Christ crucified", and in speaking of the effects of preaching "Christ crucified", he related the case of one of the worst of drunkards who was reformed by it, when everything else failed. I feel that this is nearly all the hope we can have for the reform of any confirmed drunkard, "trusting in Jesus"- "looking unto Jesus". (T.S.R. 51. 2 P.M. 63. S.S. 58.) Mar. 4. Monday. Still a little cloudy. Mr. Ross here (T.S.R. 51. 2 P.M. 67. S.S. 60.) Mar. 5. Tuesday. We have had heavy showers today, very heavy one at night with hail. (T.S.R. 54. 2 P.M. 60. S.S. 49.) 1872. Mar. 6. Wednesday. The day has been rather windy, but fair. We have attended the Lodge this evening. We shall probably have three new members next week. (T.S.R. 48. 2 P.M. 60. S.S. 57.) Mar. 7. Thursday. This afternoon I have spent at Mr. Geffroy's, with the little children. At night, I sent the little children home, Ida carrying the baby, while I myself remained to attend the prayer meeting at Father's. After getting Hannah's children to bed, we went to the meeting, which was not very fully attended. Mr. Ross was there, and proposes to have future meeting in the church, and he also proposes to announce the chapter of Bible to be read at the meeting, on the Sabbath beforehand, that all may study before coming together, and be better prepared to enjoy it. (T.S.R. 44. 2 P.M. 65. S.S. 55.) Mar. 8. Friday. Cloudy & rainy. (T.S.R. 50. 2 P.M. 63. S.S. 57.) Mar. 9. Saturday. The morning was cloudy and rainy, the afternoon bright and pleasant. Mr. Jones of Copperopolis was here this afternoon. He is reporting stories about Mr. Chester, stories which tend to make his character disreputable. Now whether they are true or not, I see no occasion for Mr. Jones to take pain, to go about and circulate such reports, especially as Mr. Chester is no longer our pastor. Mr. Jones' talk this afternoon has not raised him in my estimation Mrs. Wallace and Mrs. Geffroy also called, Mr. Ross has been here all the week. (T.S.R. 55. 2 P.M. 67. S.S. 60.) Mar. 10. Sabbath. A cloudy day. We have attended church, as usual Mr. Ross preached about the childhood of Jesus from the text, "And he went down with his parents unto Nazareth, and was subject unto them," He talked so much to the boys, in such a sarcastic way, and looked at them so much, that he made them uncomfortable, by drawing particular attention to them, and in my heart I pitied them. I think he made a mistake in supposing that he should get himself into favor with the boys, by preaching