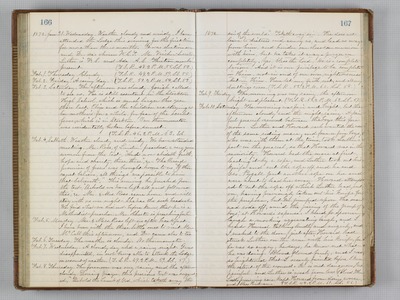 1872. Jan. 31. Wednesday. Weather cloudy and windy. I have attended the Lodge this evening for the first time for more than three months. It was election eve. and Dr. was chosen W. C. T. Mr. Vischer Secretary Luther is F. S. and Ada A. S. Thirteen members present. (T.S.R. 48. 2 P.M. 55. S.S.52.) Feb. 1. Thursday. Cloudy. (T.S.R. 49. 2 P.M. 59. S.S.55.) Feb. 2. Friday, A rainy day. (T.S.R. 51. 2 P.M. 54. S.S. 53.) Feb. 3, Saturday. The afternoon was cloudy. Josiah called to see us. He is still assistant in the Stockton High School, which is much larger this year than last. Eliza and the children are staying at her mother's for a while, for fear of the scarlet fever, which is in Stockton. Our thermometer was accidentally broken before sunset. (T.S.R. 46. 2 P.M. 63. S.S. Feb. 4, Sabbath. Weather cloudy and windy. We have attended meeting. Mr. Ross, of Linden, preached a very good sermon from the text, "And now abideth faith, hope and charity, these three," etc. The blessed promise of Jesus was brought home to us," If those cause believe, all things are possible to him that believeth." This evening he preached from the text." Behold we have left all and followed thee," etc. Mr. & Mrs. Ross came home and will stay with us over night. She has the sick headache. We find what we did not before know, that he is a Methodist preacher, Mr. Chester is preaching for him. Feb. 5, Monday. Mr. & Mrs. Ross left us after breakfast. I have been with the three little ones to visit Mrs. McCall this afternoon, and Dr. came also to tea. Feb. 6. Tuesday. The weather is cloudy. No thermometer. Feb. 7, Wednesday. A cloudy day and a rainy night. I was disappointed, in not being able to attend the Lodge, on account of weather. (T.S.R. 49. 2 P.M. 59. S.S. 57.) Feb. 8. Thursday. The forenoon was very rainy and the afternoon cloudy. During prayer, this precious text was suggested, "Behold the Lamb of God, which taketh away the 1872. sin of the world." Taketh away sin. He does not leave it to distress and annoy us, and lead us away from him, and hinder our close communion with him, but he takes it away purges are completely. Yes, bless the Lord, He is a complete Saviour. And it is our privilege to be complete in Him, not in and of our own righteousness but in Him. Here let my faith rest, and all any doubtings cease. (T.S.R. 53. 2 P.M. 60. S.S. 58.) Feb. 9. Friday. The morning was very rainy, the afternoon bright and pleasant. (T.S.R. 56. 2 P.M. 62. S.S. 57.) Feb. 10. Saturday. The morning was fair and bright, but the afternoon cloudy and the night rainy, A painful quarrel occurred between the boys this forenoon. Luther and Howard each wanted the use of the same riding mare, and four or five boys, who were with them at the time, took Luther's pact in the quarrel, so that Howard was in the minority. Howard had the mare at first, leading it by a rope, and Luther took out his knife and cut the rope off, and he and Geo. Pygall put another rope on her and were about to lead her away. Howard attempted to cut the rope off which Luther had put on, having previously taken out his knife for the purpose, but Geo. jumped upon the man and rode off, amid the jeering of the group of boys, at Howard's expense. I heard Jo Spooner laugh a mocking aggravating laugh, and I heard Howard talking loudly and angrily, and I rushed to the door, just after Howard had struck Luther on the arm with his knife, for he was so angry, he says, he knew not what he was doing. Blood flowed freely, and I was so frightened that I nearly fainted before I know the extent of the wound. It is not dangerous, but painful, and Luther is weak from loss of blood. The Locd's preserving care kept Howard from doing worse, and I bless His name. (T.S.R. 42. 2 P.M. 61. S.S. 56.)