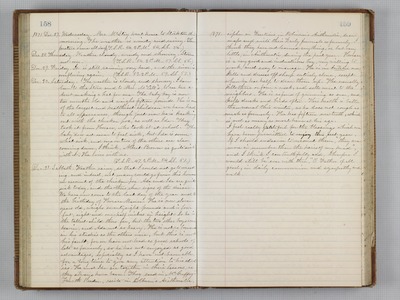 1871. Dec. 27. Wednesday. Mrs. McStay went home to Stockton this morning. The weather is windy and rainy. Temperature same all day. (T.S.R. 54. 2 P.M. 54. S.S. 54.) Dec. 28. Thursday. Weather cloudy, windy and showery. Storm not over. (T.S.R. 54. 2 P.M. 59. S.S. 56.) Dec. 29. Friday. It is still raining very hard, and the river is overflowing again. (T.S.R. 53. 2 P.M. 59. S.S. 53.) Dec. 30. Saturday. The weather is cloudy and showery. I have been to the Store and to Mrs. McCall's, to see her about making a hat for me. The baby boy is now two months old and weighs fifteen pounds. He is one of the largest and healthiest children we have had to all appearances, though just now he is breaking out with the chicken pox, as well as Ida. They took it from Horace, who took it at school. The baby does not seem to feel sick, but Ida is somewhat sick, and one or two of the others are also coming down, I think. Albert Brown is quite sick with it. He lives with us. (T.S.R. 47. 2 P.M. 54. S.S. 51.) Dec. 31. Sabbath. Weather rainy, so that I could not go to meeting, and indeed, not many could go from this house on account of the chicken pox. Ada and Ida are quite sick today, and the others show signs of the disease. We have now come to the last day of the year and to the birthday of Horace Mann. He is now eleven years old, weighs seventy eight pounds and is four feet, eight and one-half inches in height. So he is the tallest child thus far, but the two other boys were heavier, and Ada not so heavy. He is not so forward in his studies as the others were, but this is not his fault, for we have not had as good schools of late as formerly, so he has not enjoyed as good advantages, especially as I have not been able, for a long time to give any attention to his studies. He and Ida are together in their lessons, as they always have been. They read in McGuffey's Fourth Reader, recite in Colburn's Arithmetic, 1871. cipher in Fractions in Robinson's Arithmetic, draw maps and write their Daily Journals as formerly. I think they have not learned any thing, or but very little, in Arithmetic, during the past year. Horace is a very good and industrious boy, very willing to work, and easy to manage. He is our butcher now, Kills and dresses off sheep entirely alone, except when he has help to draw them up. He usually kills three or four a week, and sells meat to the neighbors. He is as fond of gunning as ever, and kills ducks and birds often. His health is better than usual this winter, as he does not cough as much as formerly. He has fifteen new teeth, which is not as many as most have at his age. I feel really grateful for the blessings which we have been permitted to enjoy this past year. If I should endeavor to recount them, "they are more in number than the hairs of my head", and I think I can truthfully add, therefore I would still be "ever with thee," O Father of all good, in daily communion and sympathy and walk.