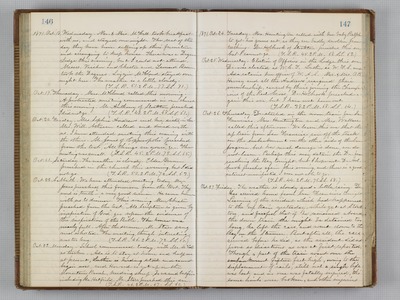 Oct. 18. Wednesday. Mr. & Mrs. McCall took breakfast with us, and stayed over night. The rest of the day they have been setting up their furniture and arranging to keep house. There was a Degree Lodge this evening, but I could not attend. Messrs. Vischer and Chester and Leonard Brown took the Degrees. Lizzie McCloud stayed over night here. The weather is a little cloudy. (T.S.R. 51. 2 P.M. 77. S.S. 71.) Oct. 19. Thursday. Mrs. McCloud called this morning. A protracted meeting commenced in our church this evening. Mr. Anthony of Stockton preached I did not go. (T.S.R. 48. 2 P.M. 68. S.S. 61.) Oct. 20. Friday. Mrs. Sophia Andrews and her sister-in-law Mrs. Will. Athearn called and dined with us. I have attended meeting this evening with the others. Mr. Jones of Copperopolis preached from the text. "All things are yours," etc. The meeting was small. (T.S.R. 45. 2 P.M. 73. S.S. 65.) Oct. 21. Saturday. The weather is cloudy. Elder Bruner preached in the church this evening, but I did not go. (T.S.R. 50. 2 P.M. 72. S.S. 63.) Oct. 22. Sabbath. We have attended meeting today. Mr. Jones preached this forenoon from the text, "Thy word is truth," a very good sermon. He came home with us to dinner. This evening Mr. Chester preached from the text, "All scripture is given by inspiration of God." etc. upon the evidences of the inspiration of the Bible. The house was nearly full. After the sermon, Mr. Starr sang and exhorted. The meeting, though interesting, was too long. (T.S.R. 46. 2 P.M. 72. S.S. 60.) Oct. 23. Monday. School commenced today, with Mr. McCall as teacher. Ada is to stay at home and help me at present, Luther is herding stock and cannot begin now, and Howard is yet upon the Mountain Ranch, herding sheep. So we send but five including Ida Hetfield. Mr. Starr preached this eve. (T.S.R. 46. 2 P.M. 67. S.S. 60.) 1871. Oct. 24. Tuesday. Mrs. Huntington called with her baby Ralph to get his gums cut, as they are badly swollen from teething. Dr. Holbrook of Stockton preaches this eve, but I cannot go. (T.S.R. 45. 2 P.M. 68. S.S. 63.) Oct. 25. Wednesday. Election of Officers in the Lodge this eve. Dr. was elected as W. C. T. Luther as W. F. S. and Ada retains her office of W. A. S. Mr. & Mrs. O. B. Harvey and all the Andrews' resigned their membership, caused by their joining the Champions of the Red Cross. Dr. Holbrook preached again this eve, but I have not been out. (T.S.R. 38. 2 P.M. 68. S.S. 64.) Oct. 06. Thursday. Dr. started in the noon train for San Francisco, Mrs. Huntington and Mrs. Wallace called this afternoon. We learn this eve that the up train from San Francisco ran off the track on the embankment on the other side of the San Joaquin, but how much damage is done, we do not learn. Perhaps this may detain the Dr. from reaching the Bay tonight, but I hope not Dr. Holbrook preaches again this evening, and there is a good interest manifested, I am not able to go. (T.S.R. 44. 2 P.M. 75. S.S. 68.) Oct. 27. Friday. The weather is cloudy and a little rainy. Dr. has arrived home from San Francisco tonight. Learning of the accident which had happened to the up train yesterday, while yet at Stockton, and fearful that if he remained aboard the down train the might be detained too long, he left the cars, and went down to the Bay on the Steamer. But after all, the cars arrived before he did, as the accident did not prove so disastrous as was at first reported. Though a part of the train went over the embankment fifteen feet high, owing to the displacement of rails, still not a single life was lost, and us one was fatally injured, tho' same limbs were broken, and other injuries