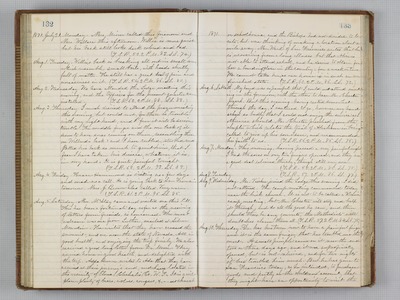 1871. July. 31. Monday. Mrs. Miner called this forenoon and Mrs. Wallace this afternoon. Willie is more quiet but his back still looks dark colored and bad. (T.S.R. 50. 2 P.M. 83. S.S. 74.) Aug. 1. Tuesday. Willie's back is breaking all out in small sores which resemble small boils, with heads shortly full of matter. He still has a great deal of pain and uneasiness in it. (T.S.R. 54. 2 P.M. 86. S.S. 80.) Aug. 2. Wednesday. We have attended the Lodge meeting this evening, and the Officers for the present quarter were installed. (T.S.R. 62. 2 P.M. 88. S.S. 83.) Aug. 3. Thursday. I much desired to attend the prayer meeting this evening, but could not, for there is trouble with my right hand, and I fear it will be serious trouble. The middle finger and the one back of it seem to have sores coming on them, resembling those on Willard's back : and I have rubbed, stroked and Patted his back so much to quiet him, that I fear I have taken his disease, whatever it is, in my hand. It is quite painful tonight. (T.S.R. 68. 2 P.M. 93. S.S. 83.) Aug. 4. Friday. Horace Hammond is visiting us a few days and made us a call. He is going back to San Francisco tomorrow, Mrs. J. Brown also called. Very warm. (T.S.R. 61. 2 P.M. 95. S.S. 85.) Aug. 5. Saturday. Mrs. McStay came and visited me this P.M. This has been a fortunate day as far as the receiving of letter from friends, is concerned. The most welcome was one from Luther, mailed at Silver Mountain. He writes that they have crossed the summit, and are near the state of Nevada. All in good health, and enjoying the trip finely. We also received a good long letter from Dr. Moore. They arrived home in good health, and delighted with the trip. Adda Brown writes to Ada that they have arrived at their journey's end, and have located in the vicinity of Elma, Chehalis Co. W. T. It is a wild place, plenty of bears, wolves, cougars, etc. no church 1871. or schoolhouse, and the Bishops had not decided to locate, but were thinking of making a location about a mile away. Mr. Ward of San Francisco writes that he is recovering from a long illness, but that Alice is not able to attend school, and he desires to obtain for her a boarding place in the country, for a week or two. We cannot take her as our house is in such an unfinished state. (T.S.R. 60. 2 P.M. 86. S.S. 72.) Aug. 6. Sabbath. My hand was so painful that I could not attend meeting in the forenoon, with the others to hear Mr. Chester preach. But this evening, having rested somewhat through the day, I ventured to go, however, my hand ached so badly that I could not enjoy the service as I otherwise should. Mr. Chester preached from the chapter which relates the trial of Abraham in being called to give up his son Isaac, and recommended his faith to us. (T.S.R. 56. 2 P.M. 85. S.S. 75.) Aug. 7. Monday. This morning, having passed a very painful night. I had the sores on my two fingers opened, and they are a good deal relieved thereby, though still very sore. (T.S.R. 55. 2 P.M. 85. S.S. 75.) Aug. 8. Tuesday. (T.S.R. 57. 2 P.M. 86. S.S. 77.) Aug. 9. Wednesday. Mr. Vischer joined the Lodge this evening. I did not attend. The camp meeting commenced today near the brick church. It is not to be called a Union camp meeting, but Mr. Chester will stay and help it through, and do all the good he can, and then should there be any converts, the Methodists will doubtless claim them all. (T.S.R. 57. 2 P.M. 84. S.S. 78.) Aug. 10. Thursday. Dr. has his turn now to have a painful finger and it is the same finger that has troubled me the most. A small pimple came on it near the end two or three days ago, and it was superficially opened, but is not relieved, and for two nights it has troubled him much. But he has gone to San Francisco today, as he intended, to purchase goods, and partly on the children's account, that they might have an opportunity to visit the