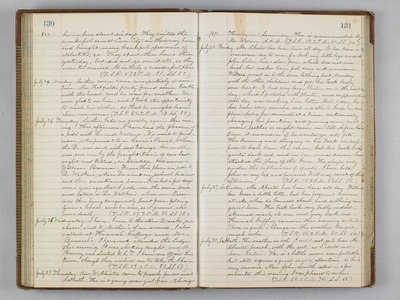 1871. having been absent six days. They visited the wonderful cave at Cave City, on their way home and brought many beautiful specimens of stalactites, etc. They spent three hours there yesterday, but did not go over it all, as they were too wearied. It is truly a wonderful place. (T.S.R. 57. 2 P.M. 91. S.S. 83.) July 24. Monday. Luther came home unexpectedly at noon time. Mr. Hetfield's party found some trouble with the horses, and he came for another. We were glad to see him, and I took the opportunity to wash his clothes, so that he might leave clean once more. (T.S.R. 58. 2 P.M. 89. S.S. 80.) July 25. Tuesday. Luther bade us goodby again this morning. This afternoon, I have had the pleasure of a ride with Dr. and Willard. We went to find a man, who proved to be on Lavin's Ranch, to whom the Dr. was sent with sad tidings. His mother was run over by the freight train of cars last night and killed, in Stockton. His name is William Brannan. From this place we rode to Dr. Walker's, where Dr. went on school business and then we returned home. It is but a few days over a year ago, that I rode over the same road and called at Dr. Walker's, whose son Oscar was then lying dangerously hurt from falling from a horse, and he was, as it proved, also near death. (T.S.R. 57. 2 P.M. 88. S.S. 79.) July. 26. Wednesday. I have been to the store to make purchases, and to Mother's of an errand. I also called at Hannah Geffroy's and Mrs. Brumel's. I have not attended the Lodge this evening. It was election night, and Mr. Harvey was elected W. C. T. I have no office this term, though they wished me to take the Chair. (T.S.R. 53. 2 P.M. 81. S.S. 68.) July 27. Thursday. Rev. W. Chester came to preach for us next Sabbath. He is a young man just from Chicago. 1871. Theological Seminary. He is recommended by Mr. Warren. A. H. M. (T.S.R. 53. 2 P.M. 80. S.S. 74.) July 28. Friday. Mr. Chester has been here all day. It has been a wearisome day to me for both my little boys are sick. John Calvin has a slow fever, which does not rise high, but makes him feel cross and worrisome. Willard went in to the river bathing last Monday with the other children and got his back badly sun-burnt. It had very large blisters on it the next day, which I protected with plaster, and supposed each day was making him better. But today he has been very nervous, and not able to keep in one place but a few minutes at a time, continually changing his position, and growing more and more restless as night came on, till before bed time, it seemed as if he would go into fits. The burning and stinging in his back we suppose to have been the cause, but his back looks quite dark red, and we fear some disease has attacked the place of the burn. He sleeps only under the influence of opiates. I have held John in my lap, and fanned Willard most of the afternoon. (T.S.R. 55. 2 P.M. 88. S.S. 76.) July 29. Saturday. Mr. Chester has been here all day. Willie has been a little better, but has frequent nervous attacks, when he bounces about, and nothing can quiet him. His back looks very badly indeed, skinned nearly all over, and very dark red. Hannah Geffroy came in this evening awhile. There is quite a change in the weather tonight, much cooler. (T.S.R. 56. 2 P.M. 80. S.S. 64.) July 30. Sabbath. The weather is cool. I could not go to hear Mr. Chester preach, with the rest, as I could not leave Willie. He is a little more comfortable but still requires a great deal of attention, as he is very nervous. Mrs. John Smith called in a few minutes this evening. I was pleased to see her. (T.S.R. 50. 2 P.M. 75. S.S. 66.)