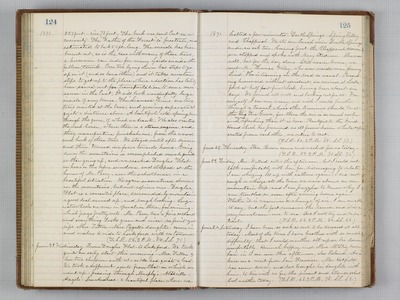 1871. 327 feet-civc-78 feet. The back was sent East as a curiosity. The "Father of the Forest" is prostrate, and estimated to be 450 ft long. The inside has been burnt out, as is the case with many of there trees, a horsemen can ride for many yards inside the fallen trunk. One tree lying down has steps to go up on it (and so have others) and it takes nineteen steps to get up to the place where a section has lately been sawed out for transportation to some museum in the East. It will look wonderfully large inside of any house. The "Siamese Twins" are two trees united at the base, and growing separate at quite a distance above. A beautiful cold spring runs through the grove, of which we drank. We also visited the wash house, where there is a steam engine, and they manufacture pincushions, from the wood and bark of there trees. We stayed until after dinner and then turned our faces towards home. Going down the mountains is accomplished much quicker than going up, and we reached Douglas Flat an hour or two before sundown, and stopped at the house of Mr. Perry, near the schoolhouse, in a beautiful situation. We again encountered showers on the mountains, but not copious ones. Douglas Flat is a romantic place, surrounded by mountains a good deal mined up, and rough looking. Large water wheels are now in operation there, for mining, which pags pretty well. Mr. Perry has a fine orchard and everything looks green and nice no fruit yet ripe, Mrs. Tatton- Mrs. Pygall's daughter came in and wishes to ride to Lock ford with us tomorrow (T.S.R. 56. 2 P.M. 84. S.S. 71.) June 21. Wednesday. From Douglas Flat to Locke ford. We took quite an early start this morning. Mrs. Tatton & her two children with us, so he had quite a load. We took a different route from that on which we went up - passing through Mucply's - Altaville - Angels' - San Andreas - a beautiful place, where we 1871. halted a few minutes. Double Springs. Spring Valley and Chapparal. We ate our lunch near Double Springs under an oak tree. Coming past the Chapparal House we stopped and spoke with Mary Stedman. She was well, but for the day alone. Still nearer home, we met Mr. Thomas Wiley, who now resides near "Jenny Lind." He is teaming on the road as usual. Proceeding homeward without accident, we arrived at Locke ford at half past five o'clock, having been absent six days. We found all well and looking out for us. For myself, I am very weary, and wish I could breathe through a tunnel, whose other terminus should be at the Big Tree Grove, for there the air is so much cooler and more refreshing than it is here. Thankful to the kind Hand which has preserved us all from harm while separated from each other, we retire to rest. (T.S.R. 60. 2 P.M. 88. S.S. 77.) June 22. Thursday. Mrs. Brown came and washed for us today. (T.S.R. 58. 2 P.M. 90. S.S. 71.) June 23. Friday. Mrs. Wallard called this afternoon, but I could not talk comfortably with her, for, discouraging to relate, I am wheezing all up with asthma again. I did not cough or wheeze all the time we were absent on our mountain trip, and I am puzzled to know why I am troubled so soon after arriving home again. Whether it is weariness or change of air, I am unable to say, but the fact remains the same, and it is a very unwelcome one to me. But I will try and be patient. (T.S.R. 58. 2 P.M. 84. S.S. 66.) June 24. Saturday. I have been so sick as not to be dressed at all today. Most of the time I have breathed with so much difficulty, that I could neither sit up nor lie down comfortably. Hannah Geffroy and Mrs. McStay have been in to see me this afternoon, also Roland, who is here on a visit from San Francisco. Mr. Hatfield has come down and has brought his daughter with him, to live with us for the present and attend school. Cool weather today. (T.S.R. 48. 2 P.M. 78. S.S. 66.)