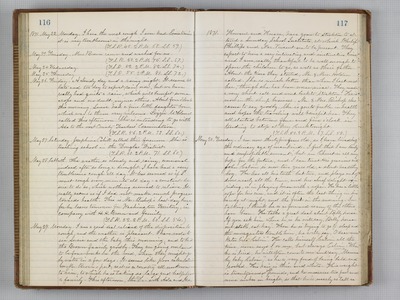 1871. May 22. Monday. I have the worst cough I ever had. Sometimes it is very troublesome in the night. (T.S.R. 45. 2 P.M. 68. S.S. 59.) May 23. Tuesday. Mrs. Brown came and washed for us. (T.S.R. 50. 2 P.M. 75. S.S. 67.) May 24. Wednesday. (T.S.R. 52. 2 P.M. 82. S.S. 74.) May 25. Thursday. (T.S.R. 55. 2 P.M. 81. S.S. 72.) May 26. Friday. A cloudy day and a rainy night. It seems too late and too dry to expect rain now, but we have really had quite a rain, which will benefit some crops and no doubt injure others. About four o'clock this morning, Susie had a fine little daughter born, which was to them very welcome.ri Lizzie McCloud called this afternoon. She is intending to go with Ada to the next Country Teacher's Examination. (T.S.R. 56. 2 P.M. 73. S.S. 60.) May 27. Saturday. Josephine Cahill called this forenoon. She is teaching school in the Douglas District. (T.S.R. 60. 2 P.M. 71. S.S. 60.) May 28. Sabbath. The weather is cloudy and rainy, unusual indeed after so long a drought. I have had a very troublesome cough all day. It has seemed as if I must cough every minute all day - a constant desire to do so, which nothing seemed to relieve. It really seems as if I did not make much progress towards health. This is Mr. Bishop's last day here for he leaves tomorrow for Washington Territory, in company with H. H. Brown and family. (T.S.R. 52. 2 P.M. 60. S.S. 54.) May 29. Monday. I am a good deal relieved of the disposition to cough, and the weather is pleasant. I have rode to see Susie and the baby this morning, and to bid the Brown family goodby. They are going overland to be four weeks on the road, when they might go by water in a few days. It seems like poor calculation on Mr. Brown's part as it is a country all unknown to him to which he is taking so large and helpless a family. This afternoon, the Dr. with Ada and Ida, 1871 Howard and Horace, have gone to Stockton to attend a Sunday School Institute, at which Philip Phillips and Mr. Vincent are to be present. They expect to have a very interesting and instructive time and I am really thankful to be well enough to spare the children to go, as well as their father. About the time they started, Mr. & Mrs. Holden called. She is much better than when I last met her, though she has been worse since. They made a very short call and went back to Stockton. He is now in the sheep business. Mr. & Mrs. Bishop also came to say goodby. She is quite feeble in health and hopes the traveling will benefit her. They all started between four and five o'clock intending to stop at Dry Creek tonight. (T.S.R. 50. 2 P.M. 67. S.S. 58.) May 30. Tuesday. I am now thirty five years old, so I have lived half the ordinary age of mankind. I feel that I am truly an "unprofitable servant," but in Christ is all my hope for the future, and I can trust his gracious aid John Calvin is now two years old, a stout healthy boy. He has all his teeth but two, and plays out of doors nearly all the time, and his chief delight is in riding, or in playing horse with a rope. He has a little rope for his own, and it is often the last thing in his hands at night, and the first in the morning. In talking, I think he is as forward as any of the others have been. He talks a great deal about "Billy horse." If you ask him where he is he will say, "Billy horse out stable, eat hay." When he is trying to go to sleep and the musquitoes trouble him, he willy say, "O dear me Reter bite Calvin." He calls himself Calvin all the time, never says I or me, but always Calvin, When he is tired, he will often come to me and say, "Mamma by baby Calvin," as he is very fond of being held and rocked. His hair is thin and white. His weight is twenty six and one-half pounds, and he measures two feet and nine inches in height, so that he is nearly as tall as