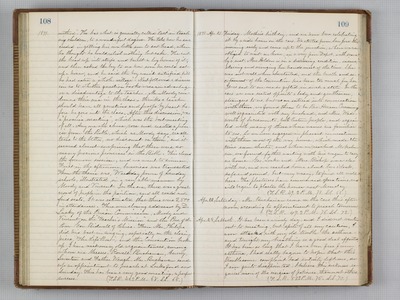 1871 method." He has what is generally called "tact" in teaching children, to a wonderful degree. He told how he succeeded in getting his own little son to eat bread, when he thought he could relish nothing but cake. He cut the bread up into strips and built a log house of it, and then asked the boy to see how soon he could eat up a house and he said the boy wasn't satisfied till he had eaten a "whole village." Next followed a discussion as to whether question books were an advantage or a disadvantage to the teacher. Mr. Moody condemns their use in the class, thinks a teacher should have all questions and proofs by heart before he goes into the class. After this discussion, was a "promise meeting," which was the best meeting of all. Any one who chose rose and recited a promise from the Bible, which as Moody says," are all true to the letter, no discount on them," and it seemed almost surprising that there were so many precious promises in the Bible. This closed the forenoon session, and we went to dinner. Fist in the afternoon, business was transacted. Then the theme was, "Weekday power of Sunday schools, illustrated in a very able manner by Moody and Vincent. In the eve, there was a great crowd of people in the pavilion, and all could not find seats. It was estimated that there were 3,500 in attendance. There were closing addresses by Dr. Lucky of the Prison Commission, Moody and Vincent on the "Teacher's Mission" and the Pres. of the Con. Gen. Bidwell of Chico. Then Mr. Philips did his best in singing, especially on the closing piece," The Life Boat," and the Convention broke up. I have met many old acquaintances, among whom are Messrs. Rowell. Buchanan, Curry, Sweetser and Father Waugh. Mr. Buchanan sends up an appointment to preach at Lockeford next Sunday. This has been a very good meeting, a perfect success. (T.S.R. 46. 2 P.M. 68. S.S. 65.) 1871. Apr. 21. Friday. Mother's birthday, and we have been celebrating it by a ride home on the cars. We started from San Jose this morning early and came up to the junction, where we were obliged to wait an hour, in a very poor Depot, with scarcely a seat. Mrs. Holden is in a distressing condition, insane staring and wringing her hands most of the time. She was not well when she started, and the bustle and excitement of the convention has been too much for her. It is sad to see one so gifted in such a state. In the cars we were seated opposite a lady and gentleman, strangers to us, but as we entered into conversation with them, we found them to be Rev. Hiram Cumming well acquainted with my husband, and Mrs. Wadsworth of Sacramento, both Eastern people, and acquainted with many of those whose names are familiar to us. So we were engaged in pleasant conversation with them most of the way home, which made the time seem shorter, and when we reached Mokalumce, we found father waiting with his wagon to carry us home. Geo. Locke and Mrs. Bishop were also with us, and we reached home about two o'clock, safe and sound, but very weary, to find all well here. The plasterers have commenced operations, and will begin to plaster the house next Monday. (T.S.R. 49. 2 P.M. 78. S.S. 68.) Apr. 22. Saturday. Mr. Buchanan came on the cars this afternoon, according to appointment to preach tomorrow. (T.S.R. 49. 2 P.M. 76. S.S. 72.) Apr. 23. Sabbath. It has been a windy day, and I did not venture out to meeting, but spite of all my caution, I am attacked with my old trouble - the asthma and tonight my breathing is a good deal affected. It has been so long that I have been free from asthma, I had really begun to hope that this troublesome complaint had entirely left me, so I am quite disappointed. I believe this sickness requires more of the exercise of patience, than most others. (T.S.R. 58. 2 P.M. 75. S.S. 70.)