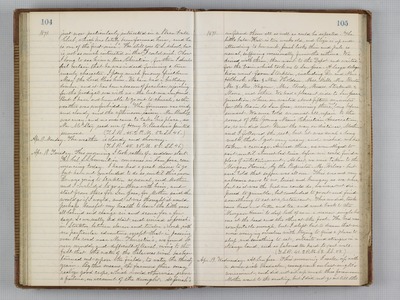 1871. just now particularly interested in a Base ball Club, which has lately been formed here, and he is one of the "first nine." He still goes to S. school, but is not so much interested in that as I could wish. O how I long to see him a true Christian, for them I should feel certain that he was indeed forming a true manly character. I pay much for my fist born. May the Lord bless him. We have had a birthday dinner, and it has been a season of peculiar rejoicing for the prodigal was with us - the last one was found. But I have not been able to go out to church, as the weathers was unforbidding. The forenoon was windy and cloudy and the afternoon rainy. Mr. Bishop was away, and no once came to take his place, so Mr. McStay read one of Herry W. Bucher’s printed sermons. (T.S.R. 45. 2 P.M. 52. S.S. 46.) Apr. 17. Monday. The weather is cloudy and showery. (T.S.R. 45. 2 P.M. 55. S.S. 46.) Apr. 18. Tuesday. This morning I took rather of a sudden start. The Cal. S.S. Convention convenes in San Jose, commencing today. I have had a great desire to go but have not concluded to do so until this morn. Dr. was going to Stockton as usual, and Mother and I concluded to go in there with him, and start from there for San Jose, for Mother said she would go if I would, and it was thought it would perhaps benefit my health to leave the little ones all behind and change air and scene for a few days. So we really did start, and arrived at Josiah's in Stockton, between eleven and twelve o'clock, with no particular adventure, except that in passing over the road near Mr. Thurstin's, we found it very muddy and difficult of travel, owing to the fact that the water of the Calaveras river has been turned out upon the fields, to water the thirsty grain. By this means, the farmers there may realize good crops, which would otherwise prove a failure, on account of the drought. At Josiah's 1871. we found them all as well as could be expected. The little babe. Kate is two weeks old, and Eliza is up and attending to her work. Josiah looks thin and pale as usual, suffering occasionally from the asthma. We dined with them, then went to the Depot and waited for the train which took us to San Jose. A large delegation went from Stockton, including Dr. and Mrs. Holbrook, Mr. & Mrs. Holden, Mrs. Mills, Mrs. Burton Mr. & Mrs. Wagner, Mrs. Boody, Messrs. Stockwell & Moore, and others. We had a pleasant ride to San Jose junction, where we waited about fifteen minutes for the train to San Jose, arriving there not long before sunset. We were told we must all repair to the rooms of the Young Men’s Christian Association, so, as we did not know the way or distance, Mother and I followed the rest, but it was such a long walk, that I got very weary, and wished we have taken a carriage. Arrived there, we were obliged to wait until almost bed-time, before we could find a place of entertainment. At last, we were taken to the "Morgan House" by the Proprietor - Mr. Wilcox - but were told that supper was all over. This was not very welcome news to us, tried and hungry as we were, but as it was the best we could do, we were not disposed to grumble, but concluded to go out and find something to eat at a restaurant. This we did, took some bread and butter and tea, and went back to the "Morgan House" to sleep both of us in a narrow single bed one at the head and the other at the foot. The bed was comfortable enough, but I slept but to dream that we were wearying ourselves with trying to find a place to sleep, and something to eat, outcasts and strangers in a strange land, and so labored too hard to rest well. (T.S.R. 41. 2 P.M. 63. S.S. 58.) Apr. 19. Wednesday. At San Jose. This morning I wake up with a severe sick headache, consequent on last night's worriment, and did not sit up much this forenoon Mother went to the meeting, but I did not go out till the