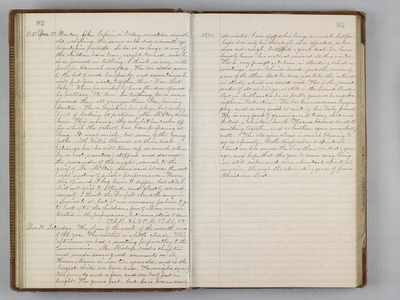 1870. Dec. 30. Friday. John Calvin is today nineteen months old, weighing the same as he did a month ago, twenty five pounds. So he is as large as any of the children have been, except Howard, and he is as forward in talking, I think, as any, with perhaps, Hannah excepted. He has added some to the list of words he speaks, and some times he will put four words together, thus! "O see that baby." When he wished to have the door opened he will say," Ote door". In teething, he is more forward than all younger than Ida, having fourteen. He is boyish in his plays, but is very fond of looking at pictures. Mr. McStay dined here. This evening, the exhibition came off for which the school has been preparing so long. It went nicely, but some of the young folks, with Willie Bonner at their head, (strange how he will turn up so much when he is not wanted) stopped and danced the remainder of the night, much to the grief of Mr. McStay. Some said it was the natural ending of such a performance. From this opinion, I beg have to differ, but still I did not wish to attend, and gladly excused myself. I think the Dr. felt about the same in reference to it, but it was necessary for him to go to look after the children, five of whom were interested in the performance, but none staid to dance. (T.S.R. 36. 2 P.M. 57. S.S. 53.) Dec. 31. Saturday. The close of the week, of the month, and of the year. The weather is a little cloudy. This afternoon we had a meeting preparatory to the communion. Mr. Bishop read a chapter and made some good comments on it. Horace Mann is now ten years old, and is the largest child we have had. He weighs seventy two pounds and is four and one-half feet in height. He grows fast, but he is hoarse nearly 1870. all winter. I am afraid his lungs are weak, but perhaps it is only his throat which is affected, as he does not cough, but spits, a great deal. We have hardly heard his natural voice at all this winter. He is very prompt as to time, in attending school or meetings, never behind-hand, just the reverse of some of the others. But he does not take the interest in study which we could wish. He is the poorest reader of all at his age, is still in the Second Reader but in Arithmetic he is pretty good, as he and Ida cipher in "Reduction", He has learned some Geography, and is very quick at writing his Daily Journal. He is very fond of gunning, and today shot and killed a chicken-hawk. He and Howard do all the milking together, and as brothers, agree remarkably well. The old year closes in much blessing to us as a family, both temporal and spiritual. I trust we live nearer the Lord than we did a year ago, and hope that the year to come may bring us still richer and more abundant spiritual mercies, through the abounding grace of Jesus Christ our Lord.