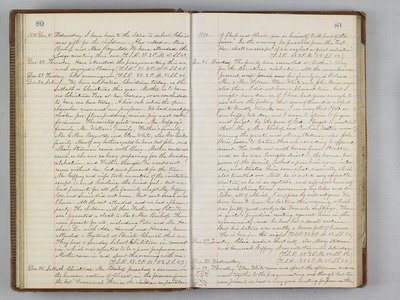 1870. Dec. 21. Wednesday. I have been to the Store to select Christmas gifts for the children. Also called on Mrs. Bishop and Mrs. Reynolds. We have attended the Lodge meeting this eve. (T.S.R. 28. 2 P.M. 47. S.S. 43.) Dec. 22. Thursday. Have attended the prayer meeting this eve, and enjoyed a blessing. (T.S.R. 31. 2 P.M. 51. S.S. 45.) Dec. 23. Friday. Cold mornings now. (T.S.R. 28. 2 P.M. 51. S.S. 45.) Dec. 24. Saturday. We have celebrated Christmas today, as the Sabbath is Christmas this year. Mother is to have no Christmas Tree at her house, so we concluded to have one here today. A live-oak set in the open chamber answered our purpose. We had roast pig chicken pie, plum pudding, wince pie and cake for dinner. The invited guests were - Mr. Geffroy's family, Mr. Wallace's family, Father's family, Mr. & Mrs. Reynolds and Ellen White, also Geo. Locke's family. None of my bothers could be here but John, and Mary Stedman came with Clara. Mother could not come, as she was so busy preparing for the Monday celebration, and Father thought he would not come without her, but sent presents for the tree. Mr. Geffroy and wife took no notice of the invitation except to send Caroline - the hired girl, but we had presents for all the family except Mr. Geffroy. Geo. and Susie did not come, but sent Sarah and Elmer. All the rest attended and we had a pleasant party. The children with their Father and Peter Thomson, presents a clock to Mr. & Mrs. Bishop. There were presents for all, including Peter and Mr. Henshaw. Dr. with Ada, Howard and Horace, have attended a Festival at Brick Church this eve. They had a Sunday School Exhibition in connection, which was reported to be a poor performance. Mother came in and spent the evening with me. (T.S.R. 28. 2 P.M. 53. S.S. 47.) Dec. 25. Sabbath. Christmas. Mr. Bishop preached a sermon on the human nature of Christ, in the forenoon from the text, "Forasmuch then as the children are partakers 1870. of flesh and blood, even so himself took part of the same." In the evening he preached from the text, "How shall we escape, if we neglect so great salvation." (T.S.R. 40. 2 P.M. 55. S.S. 50.) Dec. 26. Monday. The family have assembled at Mother's today for the Christmas celebration. All the members were present, except Josiah and his family and Roland. Mr. & Mrs. Wallace, Ellen White and John Brier were also there. I did not have a pleasant time, but I might have done so, if I had grace enough to rise above the feeling that some of them did not feel quite kindly towards me. I am sorry that I felt so unhappy all day, and I mean to strive to forgive and forget, by the grace of God. I forgot to mention that Mr. & Mrs. Bishop and Caroline Walters were among the guests, and Mary Stedman also John Brier to lecture this eve according to appointment. He rode out with Horace from Stockton and so he was brought direct to the house, but some of the family looked upon him as an intruder, and treated him some what uncivilly, which also troubled me. Still, he is not a very agreeable visitor, as he is so egotistic, and expresses himself in such strong terms, concerning his likes and dislikes, all of which, I suppose he will out grow. We have been to hear his lecture this evening, which was pretty good subject - "Female Suffrage." There is quite a prejudice exciting against him in the community, and he had but a small audience. But his lecture was worthy a house full of hearers. He is here for the night. (T.S.R. 32. 2 P.M. 55. S.S. 50.) Dec. 27. Tuesday. Clara made a short call, also Mary Stedman and Hannah Geffroy. Mary will stay until Saturday. (T.S.R. 35. 2 P.M. 54. S.S. 50.) Dec. 28. Wednesday. (T.S.R. 31. 2 P.M. 55. S.S. 52.) Dec. 29. Thursday. Ellen White came and spent the afternoon, and we went together to the prayer meeting, and though but ten were present, we had a very good meeting, for Jesus was there. (T.S.R. 36. 2 P.M. 57. S.S. 53.)