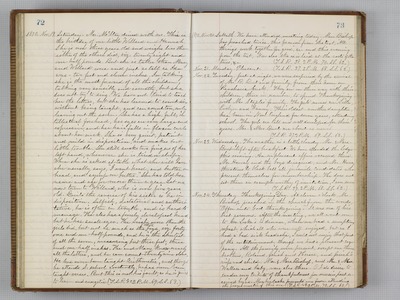 1870. Nov. 19. Saturday. Mr. McStay dined with us. This is the birthday of our little Willard and Hannah. She is now three years old and weighs less than either of the others did, viz. twenty eight and one-half pounds. But she is taller than Mary and Willard were and just as tall as Ida was - two feet and eleven inches. In talking she is the most forward of all the children, talking very sensibly and correctly, but she does not try to sing. We have not tried to teach her the litters, but she has learned to count six without being taught, and can count ten, only leaving out the seven. She has a high, full, intellectual forehead, her eyes are very large and expressive, and her hair falls in flaxen curls about her neck. She is very quiet, patient and mild in disposition, and makes but little trouble. She still sucks two fingers of her left hand, whenever she is tired or sleepy. When she is asked at table what she will have she usually says, "I want bread, and butter on bread, and syrup on butter." She has told her name and age for more than a year. Let us now turn to Willard, who is now five years old, Quite the reverse of his sister is he in disposition. Selfish, dictatorial and authoritative, he is often in trouble, and is hard to manage. He also has a finely developed head but he has small eyes. He weighs more than the girls did, but not as much as the other boys, viz. forty one and one-half pounds, and he is the shortest of all the seven, measuring but three feet, three and one-half inches. He and Mary know nearly all the letters, and he can count twenty nine alone. He has never been taught arithmetic, and though he attends S. school constantly, he has never been taught verses. But this is not his fault, as he is quick to learn end energetic. (T.S.R. 40. 2 P.M. 69. S.S. 63.) 1870. Nov. 20. Sabbath. We have attended meeting today. Mr. Bishop has preached twice, this forenoon from the text, "All things work together for good," etc. and this evening from the text. "Now also the ax is laid at the roots of the trees," etc. (T.S.R. 38. 2 P.M. 70. S.S. 62.) Nov. 21. Monday. Pleasant. (T.S.R. 37. 2 P.M. 68. S.S. 62.) Nov. 22. Tuesday. Just at night, we were surprised by the arrival of Mr. B. Burt and family, from their home on Rancharia Creek. They are on their way with their children, three in number, to spend Thanksgiving with Mr. Staples' family. The girls' names are Lilla, Evelyn and Fanny. Their oldest - another daughter, has been in New England for seven years, attending school. The girls are tall and well developed for their years. Mr. & Mrs. Burt are about as usual. (T.S.R. 37. 2 P.M. 69. S.S. 62.) Nov. 23. Wednesday. The weather is a little cloudy. Mr. & Mrs. Burt left after breakfast. We have attended the Lodge this evening. An unpleasant affair occurred there. Mr. Harvey and the boys disagreed, and Mr. Harvey threatens to black-ball all juvenile candidates who present themselves for membership. He does not set them an example worthy of imitation, I am sure. (T.S.R. 37. 2 P.M. 68. S.S. 62.) Nov. 24. Thursday. Thanksgiving Day. At eleven o'clock, Mr. Bishop preached in the church from the words, "Offer unto God thanks giving." It was one of his best sermons. After the meeting, we all went over to Geo. Locke's to dinner, where we had a sumptuous repast, which all who were well enjoyed, but as I had a bad sick headache, I could not enjoy that part of the entertainment, though we had a pleasant company. All the family were present, except our three brothers, Roland, Josiah and Horace, and Josiah's wife and child. Mr. & Mrs. Bishop, and Mr. & Mrs. Wallace and baby, were also there. O I do desire to under my tribute of thankfulness for mercies part received by us. My headache prevents me from attending the prayer-meeting this eve. (T.S.R. 43. 2 P.M. 70. S.S. 60.)