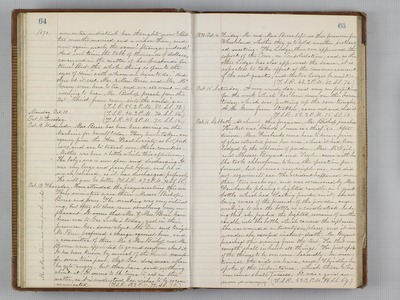 1870. ever enter or disturb her thoughts now? But two months married and a widow then, and now again nearly the same! Strange indeed! And each time, the talk of thousands of dollars, concerned in the matter of her husband's fortune! But the whole thing is open to the eyes of Him" with whom we have to do." And there let it rest. Mr. & Mrs. Brier and Mr. McCreery were here to tea, and we all went in the evening to hear Mr. Bishop preach from the text, "Christ Jesus came into the world," etc. (T.S.R. 55. 2 P.M. 80. S.S. 73.) Monday. Oct. 10. (T.S.R. 54. 2 P.M. 74. S.S. 64.) Oct. 11. Tuesday. (T.S.R. 48. 2 P.M. 70. S.S. 62.) Oct. 12. Wednesday. Mrs. Brier has been here sewing on the Machine for herself today. They have taken an agency from the Am. Tract Society as Colporteurs, and are to travel over three countries. Mother was here a little while this afternoon. The baby's sore is now open and discharging. It was very large and painful before, and he is much relieved, as it has discharged profusely. He will now be better. (T.S.R. 47. 2 P.M. 74. S.S. 66.) Oct. 13. Thursday. Have attended the prayer meeting this eve. Three ministers were there - Messrs. Bishop, Brier and Jones. The meeting was very interesting, but after its close came something very unpleasant. It seems that Mr. & Mrs. Brier have been over to Geo. Locke's today, and in their presence Geo, swore about the Dr. and tonight Mr. Brier preferred a charge against him, and a committee of three. Mr. & Mrs. Bishop and Mr. Brown were appointed to go and see him about it. It has been known by several of the church members for some time past, that Geo. does swear when he gets angry, but they have said nothing about it. It seems to be time to act in the matter, as it is understood Geo, wishes to be excommunicated. (T.S.R. 43. 2 P.M. 79. S.S. 70.) Mr. & Mrs. Brier are here for the night. 1870. Oct. 14. Friday. Mr. and Mrs. Brier left us this forenoon for Wheat land, whither they go to hold another protracted meeting. The Lodge, this eve approved the report of the Com. on Consolidation, and, as the other Lodge has also approved the same, it is expected to take effect at the commencement of the next quarter, and the two Lodges be united. (T.S.R. 48. 2 P.M. 80. S.S. 74.) Oct. 15. Saturday. A very windy day, and very unpropitious for the work which has been done on the house today, which was, putting up the eave-troughs. A Mr. Green from Stockton, came out and did it. (T.S.R. 58. 2 P.M. 75. S.S. 69.) Oct. 16. Sabbath. At church this forenoon, Mr. Bishop preached. His text was, "Behold, I come as a thief," etc. After dinner, Mrs. Fairbanks came here to have a price of glass extracted from her arm, where it had been lodged by the explosion of powder. Mrs. McNeil, and Messrs. Bryant and Taylor came with her. She took chloroform, to have the operation performed, but it was a very simple one, and did not require its use. The accident happened more than two weeks ago, and was occasioned by Mrs. Fairbanks placing a lighted candle in a junk bottle which had blasting powder in it, she not being aware of the presence of the powder, and wishing to use the bottle as a candle-stick. In doing this, she pushed the lighted remains of another candle into the bottle, which caused the explosion. She was wounded in twenty six places, and it is a wonder she escaped instant death. Mr. Bryant preached this evening from the text. "He that over cometh shall inherit all things." He just spoke of the things to be over come. Secondly - he mentioned the aids we have, and, Thirdly - he spoke of the inheritance, which those who over come shall Jossess. It was a good sermon, so encouraging. (T.S.R. 52. 2 P.M. 76. S.S. 69.)