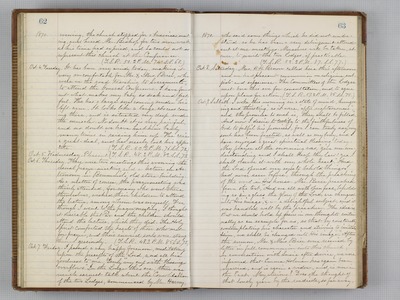 1870. evening, the church stopped for a business meeting, and hired Mr. Bishop for two more weeks, as his time had expired, and he could not so represent this church at the Conference. (T.S.R. 50. 2 P.M. 74. S.S. 68.) Oct. 4. Tuesday. It has been very windy today, making it very uncomfortable for Mr. & Mrs. Brier, who were on the road traveling to Sacramento, to attend the General Conference. I have found out what makes my baby so sick and fretful. He has a large sore coming under his left arm. It looks like a large abscess coming there, and is situated very deep under the muscle. No doubt it is very painful, and no doubt we have hurt him badly many times in raising him up. He cries a great deal, and has nearly lost his appetite. (T.S.R. 50. 2 P.M. 76. S.S. 72.) Oct. 5. Wednesday. Pleasant. (T.S.R. 48. 2 P.M. 82. S.S. 73.) Oct. 6. Thursday. There were two meeting this evening - the usual prayer-meeting, and a lecture on Astronomy in Brummel's old store-building. As a matter of course, the prayer meeting was thinly attended, for many who went there themselves, wished their children to attend the lecture, among whom was myself. For though I went to the prayer-meeting, I thought it desirable that Dr. and the children should attend the lecture, which they did. The Holy Spirit Comforted the hearts of those who met for prayer, and their inward souls were strengthened graciously. (T.S.R. 48. 2 P.M. 85. S.S. 75.) Oct. 7. Friday. I passed a very happy forenoon, meditating upon the precepts of the Lord, and all his goodness to me. "Truly my cup with blessings overflows." In the Lodge this eve, there was much earnest talk about the Consolidation of the two Lodges, commenced by Mr. Harvey, 1870. who said some things which he did not understand, as he has been a very delinquent attendant at our meetings. Measures will be taken, at once, to unite the two Lodges, if practicable. (T.S.R. 52. 2 P.M. 87. S.S. 77.) Oct. 8. Saturday. Mrs. H.H. Broun called here this afternoon and we had pleasant communion on religious subjects and experience. The Committees of the Lodges met here this eve for consultation, and to agree upon plans for action. (T.S.R. 57. 2 P.M. 85. S.S. 75.) Oct. 9. Sabbath. I woke this morning in a state of mind, hungering and thirsting," as it were, "after righteousness," and the promise to such is, "they shall be filled," And now I desire to testify to the faithfulness of God to fulfil his promises, for I can truly say, my soul has been feasted, as well as my body, and I have enjoyed a great spiritual blessing today. My prayer all the morning was, "give me understanding and I shall keep they law yea, I shall observe it with my whole heart," And the Lord opened my eyes to behold things I had never seen before, through the preaching of the word in His house. Mr. Birer preached from the text, "And we all with open face, beholding as in a glass the glory of the Lord, are changed into His image," etc. a delightful subject, and it was handled well by the preacher. The idea is, that we should hold up Jesus in our thoughts continually as an example for us, so that by constantly contemplating his character and striving to invited Him, we shall be "changed into His image." After the sermon, Mr. & Mrs. Brier were received by letter in full communion into this church. In conversation with Susie after service, we were informed that Emma Holman has again been married, and is again a widow, and is now in the East. Mysterious ! Does the thought of that lonely grave by the roadside, so far away,