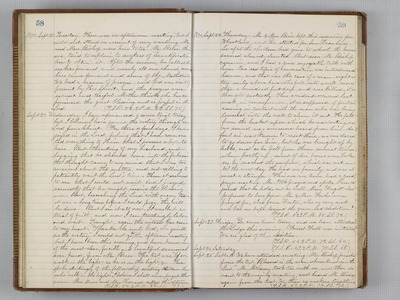 1870. Sept. 20. Tuesday. There was an afternoon meeting, but I could not attend on account of my washing, Mr. and Mrs. Bishop were here to tea. Mr. Brier, this eve, tried to explain to seekers of "Sanctification" how to obtain it. After the sermon, he called the seekers forward, and nearly all our church members came forward and some of the Methodists. We had a season of prayer, and God was visibly present by His spirit, and the prayers were earnest and tearful. Mother thinks she has experienced the great blessing, and is joyful in the Lord. (T.S.R. 52. 2 P.M. 83. S.S. 75.) Sept. 21. Wednesday. I have experienced a severe trial today, but I believe I have gained the victory "through our Lord Jesus Christ. For three or four day, I have joyed in the Lord, feeling that I had consecrated everything to Him that I possess or hope to have. But thinking of my husband, and longing that he should come into the "fulness" the thought came to my mind that I was too anxious about the matter, and not willing to patiently wait the Lord's time. Then it seemed to me that I could not wait, and prayed earnestly that he might receive the blessing now. But, beseeching the Lord "with many tears," it was a long time before I could pray, "thy will be done." But I see it all now. It was but a trial of faith, and now I can trustingly labor and wait. Tonight, again the witness has come to my heart. Thanks be unto God, who giveth us the victory." I could not go to the afternoon meeting. but I have been this evening, and have heard one of the most clear, forcible and beautiful sermons I ever heard from Mr. Brier. The text was," If we walk in the light, as he is in the light," etc. He spoke strikingly of the fellowship existing between those who "walk in the light. "I believe I shall never forget that sermon. Mrs. Miner and Mrs. Howard called this afternoon. (T.S.R. 50. 2 P.M. 88. S.S. 77.) 1870. Sept. 22. Thursday. Mr. & Mrs. Brier left this morning for Wheatland, and Dr. Started for San Francisco. So after the children had gone to school, the house seemed almost deserted. But soon Mr. Bishop came in, and I had a good enjoyable talk with him. One sad topic of conversation was introduced, however, and that was the case of a man, eight or ten miles above here, who fell into a well, more than a hundred feet deep, and was killed, it is thought instantly. This accident occurred last week, in consequence, it is supposed, of foul air coming in contact with the man as he was being lowered into the well, to clean it out. He fell from the bucket upon which he was resting, and no sound was evermore heard from him. As foul air was known to exist there, no one dared to go down for him, but he was brought up by hooks, and as he fell from them several times when partly up, most of his bones were broken ere he reached the surface, which was not until the next day. He had no family, and was almost a stranger. This eve we have had a good prayer-meeting. Mr. Polk prayed and spoke, I am rejoiced that he holds out so well. Mary Fugitt also professed to love Jesus. Mr. & Mrs. Fowler were prayed for, also Josie Foster, who is very sick, and has no hope beyond the grave. Sad condition! (T.S.R. 52. 2 P.M. 85. S.S. 72.) Sept. 23. Friday. Dr. came home today, and we have attended the Lodge this evening. Forrest Foote was initiated. We are glad of this addition. (T.S.R. 54. 2 P.M. 73. S.S. 64.) Sept. 24. Saturday. (T.S.R. 49. 2 P.M. 75. S.S. 68.) Sept. 25. Sabbath. We have attended meeting. Mr. Bishop preached from the text, "Blessed is the man whose trust is in the Lord." Mr. McCreery took tea with us, and then we went to the evening meeting, and heard Mr. Bishop again from the text, "We then as workers together." (T.S.R. 50. 2 P.M. 79. S.S. 72.)