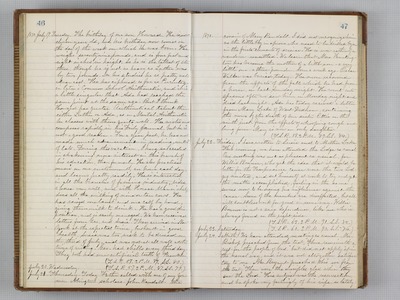 1870. July 19. Tuesday. The birthday of our son Howard. He is now eleven years old, and his birthday now comes on the day of the week on which he was born. He weighs seventy nine pounds, and is four feet and eight inches in height. So he is the tallest of the three, though he is not as heavy as Luther was by two pounds. In his studies he is pretty well advanced. He has ciphered as far as Percentage in Eaton's Common School Arithmetic, and it is a little singular that Ada had reached the same point at the same age. But I think Howard has greater Arithmetical talent than either Luther or Ada, as in Mental Arithmetic he classes with them quite well. He writes and composes rapidly in his Daily Journal, but he is not a good reader. For a year past, he has not made much advancement in reading, until of late. During this vacation, I have succeeded in awakening more interest in this branch of his education, than formerly. He also practises music on our instrument, an hour each day, and learns pretty readily. He is interested in all the branches of farming industry, rides a horse very well, and with Horace Mann's help does all the milking of nine or ten cows. He has raised one lamb and one calf by hand, giving them milk to drink. He has a good disposition, and is easily managed. We have received letters from Geo. and Susie. They arrived in New York at the expected time, but not in good health. Susie was too sick to be dressed on the third of July, and was not at all well at the time of writing, Geo. had chills every third day. They both had new artificial teeth of Franklin. (T.S.R. 57. 2 P.M. 87. S.S. 80.) July 20. Wednesday. (T.S.R. 57. 2 P.M. 87. S.S. 79.) July 21. Thursday. Today Father called with one of my former Abington scholars John Randall the 1870. cousin of Mary Randall. I did not recognize him as the little boy in aprons who used to be drilled by me in the first elements of science. He is now rather of a wanderer unsettled. We learn that Mrs. Huntington has become the mother of a little son - a very little one - a three-pounder - born a week ago. Oscar Walker was buried today. He never recovered from the effects of the fall which he had from a horse, on last Sunday night. He went into spasms after we saw him on Monday night and died last night. Ada has today received a letter from Mary Locke of West Dedham, containing the news of the death of her sister Ettie on the ninth inst. from the effects of whooping cough and lung fever. Mary is now an only daughter. (T.S.R. 58. 2 P.M. 89. S.S. 84.) July 22. Friday. I have written to Susie and to Mother Locke. This evening, we have attended the Lodge as usual. Our meeting was not as pleasant as usual, for Willie Bonner, who got the idea that it would be better for the Temperance cause were the two Lodges united, and set himself at work to try and get the matter accomplished, failing in the same, seems now to be using his influence against the cause. Some of the members are disaffected, but all will doubtless work for good in some way. Willie Bonner is not a sure dependence, like one who is always found on the right side. (T.S.R.63. 2 P.M. 91. S.S. 82.) July 23. Saturday. (T.S.R. 60. 2 P.M. 90. S.S. 74.) July 24. Sabbath. We have attended meeting as usual. Mr. Bishop preached from the text. "There remaineth a rest for the people of God," but did not apply it in the usual way, and it was not altogether satisfactory to me. Mr. Bryant preached this eve from the text, "Then were the disciples glad when they saw the Lord." His subject was the resurrection, and he spoke very feelingly of his wife, so lately: