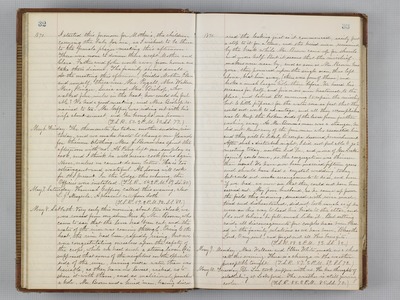 1870. I started this forenoon for Mother's, the children carrying the baby for me, as I wished to be there to the female prayer-meeting this afternoon. There were none to dinner there except Mother and Clara. Father and John work away from home and take their dinner. The family seems small. At the meeting this afternoon, besides Mother, Clara and myself, there were Mrs. Pygall, Mrs. Wallace Mrs. Ringer, Susie and Mrs. Bishop, who walked four miles in the heat, how could she feel able? We had a good meeting, and Mrs. Bishop remained to tea. Mr. Geffroy was riding out with his wife about sunset, and he brought me home. (T.S.R. 50. 2 P.M. 80. S.S. 77.) May. 6. Friday. The thermometer has taken another sudden rise today, and we make haste to change our flannels for thinner clothing. Mrs. J. Brown has spent the afternoon with us. Ah Peng left our employ as cook, and I think he will never cook for us again. Never, unless we cannot do any better. He is too extravagant and wasteful. Ah Soong will cook for the present. In the Lodge this evening, the Officers were installed. (T.S.R. 54. 2 P.M. 89. S.S. 80.) May. 7. Saturday. Hannah Geffroy called this evening, also L. J. Megerle. A pleasant call from both. (T.S.R. 59. 2 P.M. 92. S.S. 81.) May. 8. Sabbath. Very early this morning, about two o'clock, we were roused from our slumbers by Mr. Brown, who came to say that the levee had been cut, and the water of the river was coming through. Owing to the heat, the river had been rapidly rising, but we were congratulating ourselves upon the safety of the crops, while we had such a strong levee. It is supposed that some of the neighbors on the opposite side of the river, having more water than was desirable, as they have no levees, wished us to share it with them, and so maliciously punched a hole. Mr. Brown and a hired man, having discovered 1870. the leaking just as it commenced, easily put a stop to it for a time, and the hired man remained by the break while Mr. Brown came up for shovels and more help. But it seems that the mischief-makers were near by, and as soon as Mr. Brown had gone, they pounced upon the single man, thus left alone, beat him away, (there were four of them) and broke a much larger hole than before. We heard his screams for help, and five or six men hastened to the place, and labored till morning to repair the mischief but to little purpose: for the water rose so fast that they could not work to advantage, and all they accomplished was to keep the broken ends of the levee from further washing away. As Mr. Brown's man was a stranger, he did not know any of the four men who assaulted him and they will be likely to escape deserved punishment. After such a disturbed night, I did not feel able to go to meeting today, neither did Dr., and none of Geo. Locke's family could come, so the congregation was thinner than usual. We have now been married fifteen years and should have had a "crystal wedding" today, but could not make arrangements to do so, and even if we had, we now see that they could not have been carried out. My poor husband, as he came up from the field this morning, smeared with river mud, tired and disheartened, did not look much as if he were on his way to lead his bride to the "altar", and I do not believe he felt much like it. But setting aside all discouragements, few couples have been blessed in the family relations as we have been, "Bless the Lord, O my soul, and forget not all "His benefits." (T.S.R. 58. 2 P.M. 93. S.S. 82.) May. 9. Monday. Mrs. Wallace and Ellen White made us a short call this evening. There is a change in the weather perceptible tonight. (T.S.R. 57. 2 P.M. 89. S.S. 72.) May. 10. Tuesday. Dr. Lee took supper with us. He has thoughts of establishing at Locke ford. The weather is still growing cooler. (T.S.R. 55. 2 P.M. 85. S.S. 70.)