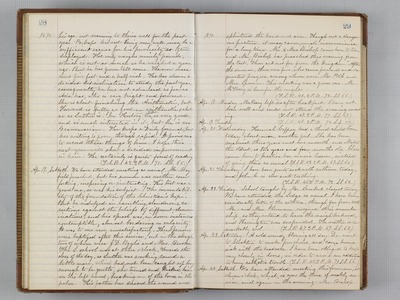 1870. his age, not seeming to thrive well for the past year. Perhaps his not being very well may be a sufficient excuse for his perversity so often displayed. He only weighs ninety pounds, which is not so much as he weighed a year ago. But he has grown tall some. He now measures five feet and a half inch. He has shown a decided dis-inclination to study the past year, consequently he has not advanced as for as Ada has, who is very bright and forward. She is about finishing the Arithmetic, but Howard is fully as good an arithmetic scholar as Luther is. In History he Luther is very good, and is much interested in it, but he is no Grammarian. He keeps a Daily Journal, but his writing is poor, though rapid. It pains me to record these things of him. I hope this next year will show a decided improvement in him. He certainly is quite found of reading. (T.S.R. 43. 2 P.M. 71. S.S. 65.) Apr. 17. Sabbath. We have attended meeting as usual. Mr. Mayfield preached, but his sermon was neither comforting inspiring or instructing. His text was a good one, so was his subject. "The immutability of the foundation of the Christian's hope." But he indulged in rambling, slanderous assertions against the beliefs of different denominations, and his speech was, in some instances contemptible, almost bordering on vulgarity. It was to me very unsatisfactory. Three persons were baptized after this review, out in the slough two of whom were J. D. Baylis and Mrs. Brooks. The S. school was at three o'clock, Towards the close of the day, as Luther was working round a little mare, which had not been caught up lory enough to be gentle, she turned and kicked him on his left hand breaking one of the bones in the palm. His father has dressed the wound and 1870. splintered the hand and arm. Though not a dangerous fracture, it may cause much inconvenience for a long time. Mr. & Mrs. Bishop came here to tea, and Mr. Bishop has preached this evening from the text, "Thou art not for from the kingdom." After the sermon, there were five who came forward and requested prayers, among whom were Mr. Polk and Mrs. Spooner. This meeting was a good one. Mr. McReery is here for the night. (T.S.R. 46. 2 P.M. 72. S.S. 65.) Apr. 18. Monday. McReery left us after breakfast. I have not been well and could not attend the evening meeting. (T.S.R. 49. 2 P.M. 77. S.S. 69.) Apr. 19. Tuesday. (T.S.R. 48. 2 P.M. 72. S.S. 59.) Apr. 20. Wednesday. Hannah Geffroy had a third child born today about noon, another girl. She has been married three years and one month, and Mabel the oldest, is two years and four months old. Clara came here to practise her music lesson, instead of going there as usual. (T.S.R. 43. 2 P.M. 69. S.S. 60.) Apr. 21. Thursday. I have been quite sick with asthma today, and John C. is also sick teething. (T.S.R. 45. 2 P.M. 72. S.S. 62.) Apr. 22. Friday. School taught by Mr. Lambert closed today. We have attended the Lodge as usual. I have been considerably better of the asthma, though for from well Mr. and Mrs. Plummer resigned their membership, as they intend to leave the neighborhood, and Harrigton was suspended. The weather is remarkably cool. (T.S.R. 47. 2 P.M. 69. S.S. 61.) Apr. 23. Saturday. A cold wind blowing all day. Dr. went to Stockton to make purchases, and came home sick with the headache. I have been obliged to keep very closely in doors, in order to avoid an addition to my asthmatic trouble. (T.S.R. 45. 2 P.M. 71. S.S. 66.) Apr. 24. Sabbath. We have attended meeting this forenoon, at eleven o'clock, which is now the time of weekly service, and again in the evening. Mr. Bishop