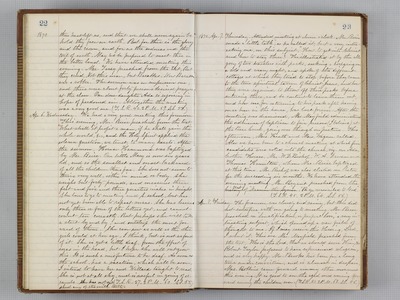 1870. thou hast left us, and that we shall never again behold thy face on earth. But for thee is the glory and the crown, and for us the sadness and the toil of earth. May we be prepared to meet thee in the better land. We have attended meeting this evening. Mr. Tausy preached from the text, "But they cried, Not this man, but Barabbas. Now Barabbas was a robber. "The sermon was an impressive one, and there were about forty persons desired prayers at the close. Our dear daughter Ada is rejoicing in hope of pardoned sin. Altogether the meeting was a very good one. (T.S.R. 40. 2 P.M. 59. S.S. 53.) Apr. 6. Wednesday. We had a very good meeting this forenoon. This evening, Mr. Brier preached from the text, "What shall it profit a man , if he shall gain the whole world," etc. and the Holy spirit applied the solemn question, we trust, to many hearts. After the sermon, Horace Hammond was baptized by Mr. Brier. Our little Mary is now six years old, and is the smallest and most backward of all the children thus far. She does not seem to thrive very well, either in mind or body. She weighs but forty pounds, and measures three feet and five and three quarters inches in height. She loves to go to meeting and S. school, but has not yet been able to repeat verses. She has learn only three or four of the tellers yet, and cannot count ten correctly. But perhaps she will take a start by and by, and outstrip the most forward of them. She can sew as well as the other girls could at her age, I think, but is not as fond of it. She is yet a little deaf, from the effect of sores in the head, but I hope she will out-grow this. It is such a misfortune to be deaf. As soon as the school has a vacation, which will be soon, I intend to have her and Willard taught to read. She is not at all shy, and is useful in going of errands. She has not yet shed any of the milk teeth. (T.S.R. 37. 2 P.M. 60. S.S. 55.) 1870. Apr. 7. Thursday. Attended meeting at eleven o'clock. Mr. Brier made a little "talk", as he called it, but a very interesting one, on this subject", How to get into Christ and how to stay there?" He illustrated it by the allegory of two travelers with packs, seeking a lodging on a cold and weary night, and spoke of the different cottages at which they tried to stop, before they came to the true spiritual tavern of Christ Jesus, and how they were required to throw off their packs before entering there, and be content to leave them out, and how one, for returning to his pack after having once been in the house, was lost forever. After the meeting was dismissed, Mr. Mayfield administered the ordinance of baptism to five persons (I believe) at the Bear Creek, going over though our pasture. This afternoon, Mrs. Heath and Mrs. Wagner called. Also we have been to a church meeting at which five candidates were voted into the church, viz - our Ada, brother Horace, Mr. W. D. Bishop, W. A. Dawson and Thomas Hamilton, whom Mr. Brier baptized at this time. Mr. Bishop was also elected one Pastor for the succeeding six months. We have attended the evening meeting. Mr. Bryant preached from the text, "Be ye reconciled to God". (T.S.R. 45. 2 P.M. 64. S.S. 56.) Apr. 8. Friday. The forenoon was cloudy and rainy, but this did not interfere with our going to meeting. Mr. Brier preached on "Sanctification, or perfect love", a very interesting subject, which opened up a new field of thought to me. If I may receive this blessing, Lord, I want it. This eve Mr. Mayfield preached from the text, "Who is the Lord, that we should serve Him", etc. Robert Taylor professes to have experienced religion, and is very happy. Mr. Brooks has been for a long time under conviction, and is almost in despair. Mrs. Robbins came forward among other mourners this evening. It is good to see the aged ones coming forward among the children ever. (T.S.R. 51. 2 P.M. 68. S.S. 56.)