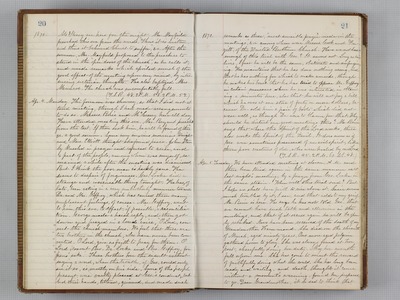 1870. McCreery are here for the night. Mr. Mayfield preached this eve from the word, "Thus it is written, and thus it behooved Christ to suffer," etc. After the sermon, Mr. Mayfield proposed to the preachers to stand in the "open doors of the church", as he calls it, and made remarks which spoiled much of the good effect of the meeting upon my mind, by introducing sectarian thoughts. He also baptized Mrs. Munroe. The church was uncomfortably full. (T.S.R. 48. 2 P.M. 58. 2 P.M. 53.) Apr. 4. Monday. The forenoon was showery, so that I did not attend meeting, though I had made arrangements to do so. Messrs. Brier and McCreery here all day. Have attended meeting this eve. Mr. Bryant preached from the text, "If thou seek him, he will be found of thee" etc. a good sermon. Some very anxious mourners tonight and Mrs. Elliott thought she found peace. John Stanly Kneeled in prayer and refused to arise, and a part of the people, among whom was myself, remained a while after the meeting was dismissed. But I think the poor man is hardly sane. He seems to despair of forgiveness. Geo. Locke did a strange and inexcusable thing tonight. He has, of late, been acting in a very unbrotherly manner towards Dr. and Mr. Geffroy, which has caused them many unpleasant feelings, of course. Mr. Geffroy, went to him, this eve, to effect, if possible, a reconciliation. George made a harsh reply, and then got down and prayed in a loud voice, "O Lord, convert the church-members. We feel that there are two brothers in the church, who have never been converted. O Lord, give us faith to pray for them. O Lord, convert Bro. Dr. Locke and Bro. Geffroy, for Jesus' sake. These brothers bore the insult without saying a word, when the trouble, if Geo. could only see it so, is mostly on his side. Some of the people present, were vastly pleased at Geo.'s conduct, rubbed their hands, tittered, grinned, and made such 1870. remarks as these, "most sensible prayer made in the meetings," etc. among whom were Messrs. Cook and Fregitt, of the United Brethren Church. Have we not had enough of this trial with Geo.? It seems not. Long as he lives. I fear he will be the same, obstinate and unforgiving. He maintains that he has done nothing wrong, and that he has nothing for which to make amends, though he makes his boast that he has tried to oppose Mr. Geffroy in certain measures where he was interested in obtaining a minister here, also that he will not pay a bill which he owes at our store of party or more dollars, because Dr. sold him a pair of boots which did not wear well, as though Dr. were to blame for that. Why should he disturb our good meeting thus? Mr. Brier says that where the spirit of the Lord works, there also works the spirit of the Devil. It does seem as if Geo. were sometimes possessed of an evil spirit, like those poor creatures of old, who were healed by our Lord. (T.S.R. 45. 2 P.M. 60. S.S. 48.) Apr. 5. Tuesday. We have attended meeting at eleven, A. U. and there been tried again in the same manner as at last night's meeting, by a prayer from Geo. Locke in the same strain. "When will this trial end? But I hope we shall have faith to rise above it. Susie seems much troubled by it, I see, and that adds to my grief. Mr. Brier is here. He says he has now told Geo. that we cannot have such talk and allusions in the meetings, and that if it occurs again he will be openly rebuked. News have been received of the death of my Grandmother Hammond. She died on the eleventh of March, aged ninety years. One more aged pilgrim gathered home to glory. She was always found at her post, cheerfully doing her duty. May her mantle fall upon me. She has gone to meet the reward of faithfully doing what she could. She has long been ready and waiting, and death, though it came without a moment's warning, found her prepared to go. Dear Grandmother, it is sad to think that