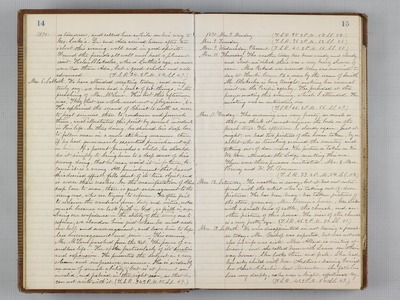 1870. us tomorrow, and called here awhile on his way to Geo. Locke's. Dr. and Ada arrived home after ten o'clock this evening, well and in good spirits. Found the friends all well and had a pleasant visit. Helen Blackeslee, who is Luther's age, is much smaller than Ada, but a good scholar and well advanced. (T.S.R. 34. 2 P.M. 54. S.S. 49.) Mar. 6. Sabbath. We have attended meeting today, and may truly say, we have had a feast of fat things, in the preaching of Mr. McLane. His text this afternoon was," They that use whole need not a physician," etc. He explained the errand of Christ to earth as, more to heal sinners, than to condemn and punish them, and illustrated this point by several incidents in His life. In thus doing, he showed his deep love to fallen man in a more sticking manner, than if he had summarily executed punishment upon him. If a parent punishes a child, he should do it simply to bring him to a deep sense of his wrong doing, that he may avoid it in future, because it is a wrong. All punishment that has not this desired effect, falls short of its true object, and is worse than useless. In the manifestation of Christ deep love to man, there is great encouragement to the erring ones, who are trying to reform. We often fail to reclaim the wanderers from duty and virtue, not so much because we lack faith in God, as faith in man, Losing our confidence in the ability of the erring one to reform, we abandon him just when he most needs our help and encouragement, and leave him to hope less discouragement and ruin. This evening, Mr. McLane preached from the text, "The power of an endless life." He spoke particularly of its duration and expansion. He presented the subject in a very solemn and impressive manner. He is evidently a man of much ability, but is at present an invalid, and palsied in the right arm, so that he can not write with it. (T.S.R. 34. 2 P.M. 55. S.S. 49.) 1870. Mar. 7. Monday. (T.S.R. 35. 2 P.M. 58. S.S. 52.) Mar. 8. Tuesday. (T.S.R. 36. 2 P.M. 62. S.S. 56.) Mar. 9. Wednesday. Pleasant. (T.S.R. 40. 2 P.M. 66. S.S. 58.) Mar. 10. Thursday. The weather today has been windy and cloudy, and about one o'clock there was a very heavy shower of rain. Mrs. Packard was married today was married today at Hawks' Corner to a man by the name of Smith. Mr. Blakeslee is here tonight, making his annual visit on the "Pacific" agency. He presided at the prayer meeting this evening, which I attended. The meeting was an interesting one. (T.S.R. 46. 2 P.M. 56. S.S. 49.) Mar. 11. Friday. The morning was very frosty, so much so that we think it must injure the buds on the peach-trees. The afternoon is cloudy again. Just at night, we had two pictures of the house taken, by an artist who is traveling around the country and taking out-of-door views. The picture is taken on tin. We have attended the Lodge meeting this eve. There were three persons initiated, Mr. & Mrs. Harvey and W. H. Bonner. (T.S.R. 33. 2 P.M. 54. S.S. 53.) Mar. 12. Saturday. The weather is rainy, but it has not interfered with the artist who is taking out-of-door pictures. He has been busy - has taken pictures of the store, granary, Mr. Brown's house, Geo. Locke with a small band of cattle, the church, and another picture of this house. The view of the church is a very pretty one. (T.S.R. 46. 2 P.M. 51. S.S. 51.) Mar. 13. Sabbath. We were disappointed in not having a preacher today. Mr. Bishop was expected, but was not well also his wife was sick. Mrs. Allard is visiting at Susie's, and she called here with Susie on their way home. She looks then and pale. She had her only child with her Arthur having buried her oldest - Charlie - last November. She falls his loss very deeply, as he was a bright, affectionate boy. (T.S.R. 41. 2 P.M. 54. S.S. 49.)