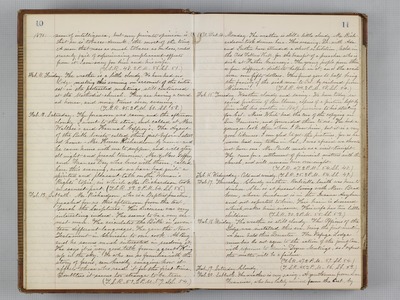 1870. man of intelligence, but my private opinion is that he is tobacco drunk, the most of the time. A man that uses as much tobacco as he does, could scarcely fail of experiencing unpleasant effects from it. I am sorry for him and his wife. (T.S.R. 48. 2 P.M. 56. S.S. 51.) Feb. 11. Friday. The weather is a little cloudy. We have had no Lodge meeting this evening on account of the interest in the protracted meetings, still continued at the Methodist church. They are having a crowded house, and noisy times every evening. (T.S.R. 45. 2 P.M. 60. S.S. 58.) Feb. 12. Saturday. The forenoon was rainy and the afternoon cloudy. I went to the store, and called at Mrs. Wallace's and Hannah Geffroy's. The Agent of the Bible Society called there just before I started home. Mr. Horace Richardson by name and he came home with me to supper, and will stay all night and preach tomorrow. Mr. & Mrs. Geffroy and Frances Day who lives with them, called here this evening, and we have had quite a spirited and pleasant talk on the "Woman's Rights" topic, in which Mr. Richardson took an earnest part. (T.S.R. 53. 2 P.M. 64. S.S. 56.) Feb. 13. Sabbath. Mr. Richardson, who is a Baptist preacher, preached for us this afternoon from the text. Search the Scriptures. His discourse was very interesting indeed. He seems to be a very earnest man. He circulates the Bible in seventeen different languages. He gave the New Testament in Chinese to our cook - Ah Peng and he seems much interested in reading it. He says it is "very good talk from a great King up in the sky." We who are so familiar with the story of Jesus, can hardly imagine how it affects those who read it for the first time. Doubtless it seems too strange to be true. (T.S.R. 51.2. P.M. 59. S.S. 54.) 1870. Feb. 14. Monday. The weather is still a little cloudy. Mr. Richardson took dinner here. This evening, Dr. with Ada and Luther have attended a school exhibition, held in the Odd Fellows' Hall, for the benefit of a preacher who is sick at Father Guernsey's. The young people from three or four different districts helped in it, and the avails were over fifty dollars. This fund goes to help being the family of the sick man to Cal. by railroad from Missouri. (T.S.R. 44. 2 P.M. 58. S.S. 54.) Feb. 15. Tuesday. Weather cloudy and rainy. We have today received pictures of Bro. Elmer, copies of a picture left by him with his mother in 1849, previous to his starting for Cal. Miss White had the care of the copying in San Francisco, and forwarded them to us. He had a younger look than when I knew him, but it is a very good likeness. I am glad to get the pictures, for as he never had any taken in Cal., I was afraid we should not have one. Mr. Powell made us a visit tonight. He came for a settlement of financial matters with the church, and will remain here over night. (T.S.R. 47. 2 P.M. 54. S.S. 48.) Feb. 16. Wednesday. Cold and windy. (T.S.R. 35. 2 P.M. 54. S.S. 49.) Feb. 17. Thursday. Cloudy weather. Rubicella Smith was here to dinner. She is at present living with Mrs. Bradburn, whose husband is in the Insane Asylum and not expected to live. His brain is diseased which makes him insane. His wife has two little children. (T.S.R. 30. 2 P.M. 55. S.S. 53.) Feb. 18. Friday. The weather is still cloudy. The Officers of the Lodge were installed this eve, being the first meeting we have held this Quarter. The Refuge Lodge members do not agree to the action of the joint Com. with reference to Union Degree Meetings, so I expect the matter will be a failure. (T.S.R. 47. 2 P.M. 59. S.S. 54.) Feb. 19. Saturday. Cloudy. (T.S.R. 45. 2 P.M. 56. S.S. 53.) Feb. 20. Sabbath. The weather is very rainy. A gentleman from San Francisco, who has lately arrived from the East, by