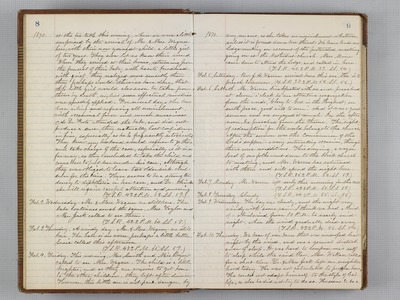 1870. at the tea table this evening, when we were a little surprised by the arrival of Mr. & Mrs. Wagner here, with their now youngest child, a little girl of two years. They soon let us know their errand. When they arrived at their home, returning from the funeral of their babe, with hearts burdened with grief. They realized more sensibly than they perhaps would otherwise have done, that this little girl would also soon be taken from them by death, unless some effectual remedies were speedily applied. For several days she has been ailing and refusing all nourishment, with occasional fever and much uneasiness, A Dr. Foote attended the babe, and did not produce a sure, they naturally lost confidence in him especially as he is frequently intoxicated They knew my husband would refuse to go there and take charge of the case, especially as it is so far away, so they concluded to take the child and come here to put her under his care, although they were obliged to leave two older sick children for the time. There seems to be a strong tendency to diphtheria in her case, and Dr. think she will require careful attention and nursing. (T.S.R. 43. 2 P.M. 63. S.S. 59.) Feb. 2. Wednesday. Mr. & Mrs. Wagner are still here. The babe continues much the same. Mrs. Taylor and Mrs. Jack called to see them. (T.S.R. 42. 2 P.M. 64. S.S. 58.) Feb. 3. Thursday. A windy day. Mr. & Mrs. Wagner are still here. The babe is no worse, perhaps a little better. Susie called this afternoon. (T.S.R. 48. 2 P.M. 65. S.S. 59.) Feb. 4. Friday. This morning, Mrs. Smith and Mrs. Bryant called to see Mrs. Wagner. The child is a little brighter, and as they are anxious to get home to the other children, they left after dinner. However, this little one is not part danger, by 1870. any means, as she takes no nourishment whatever, unless it is forced down her throat. We have had no Lodge meeting on account of the protracted meeting going on at the Methodist church. Mrs. Mince came down to attend the Lodge, and called in here. (T.S.R. 40. 2 P.M. 57. S.S. 54.) Feb. 5. Saturday. Rev. I. H. Warren arrived here this eve. He is to preach tomorrow. (T.S.R. 38. 2 P.M. 62. S.S. 56.) Feb. 6. Sabbath. Mr. Warren breakfasted with us, and preached at eleven o'clock to an attentive congregation from the words, "Glory to God in the Highest, on earth peace, good will to men." And it was a good sermon and we enjoyed it much. In the afternoon, he preached from the theme, "The" right of redemption" for the world belongs to the church. After the sermon was the communion of the Lord's supper - a very interesting occasion, though there were no additions. This evening, a wagon load of our folks went down to the brick church to meeting, and Mr. Warren has returned with them and will spend the night here. (T.S.R. 36. 2 P.M. 62. S.S. 59.) Feb. 7. Monday. Mr. Warren left early this morning for the cars. (T.S.R. 43. 2 P.M. 65. S.S. 58.) Feb. 8. Tuesday. Cloudy. (T.S.R. 44. 2 P.M. 65. S.S. 56.) Feb. 9. Wednesday. The day was cloudy, and the night very windy with some rain. I think we had a kind of a whirlwind from 10. P.M. to nearly midnight, when the wind gradually died away. (T.S.R. 43. 2 P.M. 56. S.S. 54.) Feb. 10. Thursday. We hear of one barn that was unroofed last night by the wind, and one a general disturbance of sleep. It was hard to compose one's self to sleep, while the wind blew. Mrs. Wallace called for a short time. Dr. & Mrs. Jack left our neighborhood today. He was not calculated to proper here. He could not adopt himself to the style of Cal. life, or else he did not try to do so. He seems to be a