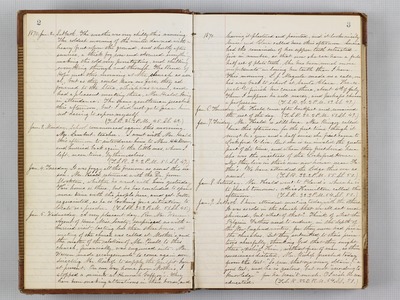 1870. Jan. 2. Sabbath. The weather was very chilly this morning. The coldest morning of the winter dawned with a heavy frost upon the ground, and shortly after sunrise, a thick fog rose and obscured everything, making the cold very penetrating, and chilling everything through and through. The Band of Hope met this morning at the church as usual, but as they could have no fire, they adjourned to the Store, which was warm, and had a pleasant meeting there, Mr. Heald being in attendance. The same gentleman preached this afternoon, but I did not go to hear him not daring to expose myself. (T.S.R. 26. 2 P.M. 45. S.S. 42.) Jan. 3. Monday. School commenced again this morning, Mr. Lambert - teacher. I went with Mr. Heald this afternoon to introduce him to Mrs. H. H. Brown, and hurried back again to the little ones, whom I left, mean-time, by themselves. (T.S.R. 34. 2 P.M. 51. S.S. 47.) Jan. 4. Tuesday. It was foggy all the forenoon as usual this season. Mr. Heald returned with the Dr. from Stockton, whither he went with him yesterday. His home is there, but he has concluded to spend more time with the people here, and get better acquainted, as he is looking for a situation to locate as a preacher. (T.S.R. 30. 2 P.M. 51. S.S. 45.) Jan. 5. Wednesday. A very pleasant day. Rev. Mr. Warren Agent of Home Miss. Society, surprised us with a hurried visit, lasting less than three hours. A meeting of the church was called at Mother's, and the matter of the relation of Mr. Powell to this church, financially, was inquired into. Mr. Warren made arrangements to come again soon, directing Mr. Bishop to supply the pulpit here at present. On my way home from Mother's, I stopped a minute at Hannah Geffroy's. They have been making alterations in there house, and 1870. having it plastered and painted, and it looks nicely. Susie and Clara called here this afternoon. Susie had the remainder of her upper teeth extracted - five in number, so that now she can have a full half set of plate teeth. She has been much more unfortunate in losing her teeth than I have. This morning, L. J. Megerle made us a call, on his way back to school at Santa Clara. He expects to finish his course there, about 4th of July. Then I suppose he will marry, and perhaps choose a profession. (T.S.R. 30. 2 P.M. 53. S.S. 49.) Jan. 6. Thursday. Mr. Heald came after breakfast and remained the rest of the day. (T.S.R. 30. 2 P.M. 51. S.S. 49.) Jan. 7. Friday. Mr. Heald is still here. Mr. Ringer called here this afternoon for the first time, though it must be a year and a half since she first came to Locke ford to live. But she is an invalid the greater part of the time, and when they first lived here she was the mistress of the Locke ford House. Now they live in their own new house near Father's. We have attended the Lodge this eve as usual. (T.S.R. 32. 2 P.M. 55. S.S. 50.) Jan. 8. Saturday. Mr. Heald went to Poland's where he is to preach tomorrow. Alice Hamilton called this afternoon. (T.S.R. 32. 2 P.M. 54. S.S. 50.) Jan. 9. Sabbath. I have attended meeting today with the others. It was so cold in the church that we all sat and shivered, but what of that? Think of what the Pilgrim Fathers need to endure, in the depth of the New England winters, for they never had fire in the churches. But they submitted to their privations cheerfully, thanking God that they might there worship Him, without fear of man, as then consciences dictated. Mr. Bishop preached today from the text, "So run, that ye may obtain;" a good text, and he is zealous, but not "according to knowledge" for he hasn't much, O I wish he was educated. (T.S.R. 32. 2 P.M. 54. S.S. 51.)