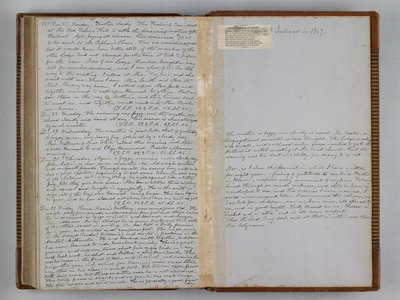 Dec. 27. Monday. Weather cloudy. The Festival Cone, met at the Odd Fellows' Hall to settle the financial matters of the Festival. After paying all expenses, there remained $77.50 to be sent to the Orphan's Home. This we considered good but it would have been better still, if the members of the other Lodge had not charged for the time it took to prepare for the same. None of our Lodge Members, brought in any bill for services rendered, and I am glad of it. On the way to the meeting, I called at Mrs. Taylor's, and she went with me. There I saw Mr. Smith and Mrs. McNeil. On my way home, I called upon Mrs. Jack, and together we went to call upon Hannah G. & Eliza. But we saw them on the way to Mother's, and they turned back to meet us, and together we all went into Mrs. Brooks' new house. (T.S.R. 42. 2 P.M. 52. S.S. 45.) Dec. 28. Tuesday. The morning was foggy, and the weather continued cloudy and damp all day. This season is characterized by such weather. (T.S.R. 39. 2 P.M. 49. S.S. 46.) Dec. 29. Wednesday. The weather is just like that of yesterday. A foggy morn, very heavy fog, followed by a cloudy day. Mrs. Wallace & Mrs. White called this evening, and afterwards Hannah G. and Eliza Hammond. Passed a pleasant evening. (T.S.R. 42. 2 P.M. 51. S.S. 46.) Dec. 30. Thursday. Again a foggy morning and a cloudy day. John Calvin in now seven months old, and weighs sixteen and one-fourth pounds. Though small, he seems very well and has a good appetite, beginning to eat some. When he sees any of the children eating anything, he will squeal like a little pig, till they give him some. Also he watches them at play and squeals and laughs in sympathy. He is the sixth in size, all of the boys, also Hannah, being larger. His hair begins to grow, and he can almost sit alone, but has no teeth as yet. (T.S.R. 32. 2 P.M. 45. S.S. 45.) Dec. 31. Friday. Horace Mann's birthday, now nine years old. Her weighs sixty four pounds and measures four feet and three inches. So he is almost as large as Luther and Howard and larger than Ada was. In his studies he is more backward than either of the others, except in writing. He has kept a Daily Journal for a year, and writes and composes fast. He reads poorly in the Second Reader (Willson's) and recites in fractions in the Mental Arithmetic. He and Howard milk together, but Horace has never learned to ride horseback much. He is a great gunner, and will sometimes short five or six birds in a day, and last week, he short and killed a chicken-hawk. He recites verses in the Band of Hope and S. school, and receives the prize this year in S. school for learning more verses than any other in his class - a small book. The two new upper front teeth have come, but those on either side have not appeared. His bodily frame is slight, and we fear he has weak lungs. He often coughs and spits much. He is generally a good quiet boy. Indexed in 1907. The weather is foggy and cloudy as usual. Mr. Heald, a Congregational minister, is here tonight. The Lodge meeting was small, and we closed early. Some wanted to go to the Methodist watch-meeting at the brick church. But the evening was too dark and chilly, for many to go out. Now, as I close this Journal, in which I have written for eight years, a feeling of gratitude to our kind Father in Heaven, inspires every movement of my pen. To have lived through so much sickness, and still be here, is wonderful to me, and the mercies I have received, I could never recount. When I commenced this volume, we had but four children, now we have nine, all spared to us, and in good health. Truly blessed are we - blessed in "basket and in store" and in all home comforts. "Bless the Lord, O my soul, and all that is within me, bless his holy name."