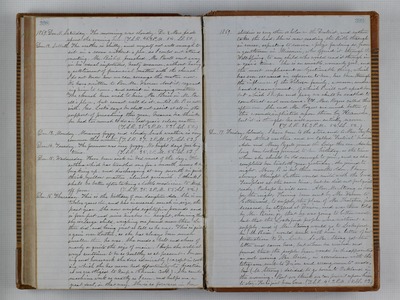 1869. Dec. 11. Saturday. The morning was cloudy. Dr. & Mrs. Jack spent the evening here. (T.S.R. 46. 2 P.M. 54. S.S. 50.) Dec. 12. Sabbath. The weather is chilly, and myself not well enough to sit in a room without a fire, so I could not attend meeting. Mr. Bishop preached. Mr. Powell went away in his usual impetuous, hasty manner, without having a settlement of financial matters with the church. I do not know how we can arrange the matter now. We have written to Rev. Mr. Warren about it, requesting him to come, and assist in arranging matters. The church here wish to hire Mr. Brier in Mr. Powell's place, but cannot well do it, until M. P. is settled with. Geo. Locke says he shall not assist at all in the support of preaching this year, because he thinks he had too much to do in last year's salary matter. (T.S.R. 38. 2 P.M. 53. S.S. 50.) Dec. 13. Monday. Morning Foggy and cloudy. Such weather is very common this winter. (T.S.R. 37. 2 P.M. 57. S.S. 53.) Dec. 14. Tuesday. The forenoon was very foggy. No bright days for a long time. (T.S.R. 35. 2 P.M. 56. S.S. 53.) Dec. 15. Wednesday. Have been sick in bed most of the day. The asthma which has troubled me for a month, seems to be breaking up, and discharging at my mouth in quite thick, yellow matter, almost greenish. I think I shall be better after taking a little medicine to keep off fever. (T.S.R. 35. 2 P.M. 55. S.S. 52.) Dec. 16. Thursday. This is the birthday of our daughter Ada. She is now twelve years old, and has increased much in size, the past year. She now weighs eightyfive pounds and is four feet and nine inches in height, showing that she is a large child, weighing one pound more than Luther did, and being just as tall as he was. This is quite a gain over Luther, as she has always been much smaller than he was. She needs a belt and shoes of nearly or quite the size of mine. I hope she will at ways continue to be as healthy as at present. In sewing and housework she does admirably (except in cooking, which she has never had opportunity to practice, as we are obliged to keep a China Cook). She can do machine work as neatly as I can, and helps one a great deal, in that way. She is as forward in her 1869. studies as any other scholar in the District, and rather takes the lead. She is now reading the Bible through in course, expecting to receive a prize for doing so, from a gentleman in Missouri, who offered it through the Well-Spring, to any child who would read it through in a year's time. She is an amiable, womanly girl, and the most unpleasant or objectionable thing, which has ever accused in reference to her, has been through the influence of the Wilcoxon family, a mean, underhanded arrangement, of which I will not speak here but which I hope and pray we shall be enabled to counteract and over come. ( Mrs. Rogers called this afternoon. She and Mr. Rogers are much better of the wounds inflicted upon them by Kermode, but it is thought he will never entirely recover. (T.S.R. 36. 2 P.M. 54. S.S. 52.) Dec. 17. Friday. Cloudy. I have been to the store, and to Mrs. Taylor’s, Mrs. McNeil was there, and we talked "Festival" business Ada and Mary Pygall joined the Lodge this eve. Ada has long been looking forward to her birthday, as the time when she should be old enough to join, and as she completed her twelvth year yesterday, she joined to night. Mary P. is but three months older. I have always thought Luther would unite with the Good Templars at the same time, but he did not feel quite ready. Perhaps he will soon. A Rev. Mr. Strong is here for the night. Having been sent by Mr. Warren to Cottonwood, to supply the place of Mr. Thatcher, just deceased, he stopped at Dixon, and was there told by Mr. Brice, P, that he was going to Cottonwood, but that the Lockeford people were without a supply, and if Mr. Strong would go to Lockeford, he (Mr. Brice) would send with him a letter of introduction to Dr. Locke. So Mr. Strong got the letter and came here, but when he arrived and found that the people here would be disappointed in not seeing Mr. Brier, in accordance with the telegram sent to Dixon and arrangements made, he (Mr. Strong) decided to go home to Oakland in the morning. But we think we can prevail upon him to stay. He is just from Conn. (T.S.R. 41. 2 P.M. 58. S.S. 53.)