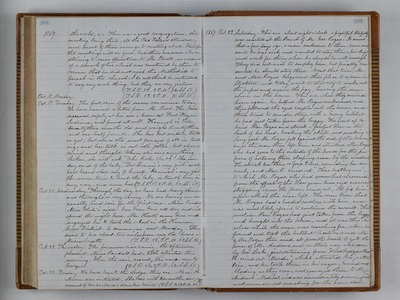 1869. the world," etc. There was a good congregation, the meeting being there, all the Odd Fellows attended, and most of them never go to meeting at all. We hope the meetings will do good, but there are some who are striving to raise opposition to Mr. Powell, on account of a remark of his, which was construed by them to mean that he did not wish the Methodists to preach in the church. I do not think he intended to say any such thing, but they are very jealous. (T.S.R. 50. 2 P.M. 74. S.S. 66.) Oct. 18. Monday. (T.S.R. 53. 2 P.M. 71. S.S. 66.) Oct. 19. Tuesday. The first rain of the season commenced today. We have received a letter from Mr. Rock. He had received safely at his son's home at Fort Wayne, Indiana, and found all well. Hannah is today twenty three months old and weighs twenty three and one-half pounds. She has but sixteen teeth as yet, but she is the most forward of all in talking, and her talk is not idle jabber, but shows mind and thought. When she sees anything broken, she will ask, "Who broke that?" She one day said of the baby, "Dat Donnie's my girl." as she had heard Ada say of herself, "Hannah's my girl.” She never tries to hurt the baby, or trouble him in any way, and never has. (T.S.R. 57. 2 P.M. 64. S.S. 60.) Oct. 20. Wednesday. Through the day we have had heavy showers and the night is very rainy. We are having an unusually hard rain for the first one. Miss Randall Miss White's niece - has been here all day and will spend the night here. Mr. Heath came here and engaged her to teach the school in the Harmony Grove District to commence next Monday. She used to live about two miles from my old home in Massachusetts. (T.S.R. 56. 2 P.M. 64. S.S. 60.) Oct. 21. Thursday. The forenoon was rainy, the afternoon pleasant. Miss Randall had a tooth extracted this morning. When the rain ceased, she went over to George's. (T.S.R. 56. 2 P.M. 62. S.S. 61.) Oct. 22. Friday. We have been to the Lodge this eve. Mrs. A. Miner was initiated. She lives with her mother now, on account of her husband's drunken habits. (T.S.R. 46. 2 P.M. 65. S.S. 60.) 1869. Oct. 23. Saturday. This eve, about eight o'clock, a frightful tragedy was enacted at the Ranch of Mr. Geo. Rogers. It seems that a few days ago, a man unknown to them, came and said he was sick and wanted to stay there a few days and work for them when he should be well enough. They did not wish to employ him, but finally consented he should stay there. About that time, Mr. and Mrs. Rogers bargained their place to a man in Stockton, and today went to that city to make out the papers and receive the pay, leaving the man alone in the house. This eve, when they arrived home again, he helped Mr. Rogers unharness, and then followed the aged couple into the house, and there tried to murder them with a heavy hatchet he had just taken from the buggy. He went up behind Mr. Rogers and struck a fearful blow on the back of his head, breaking the skull, and making a long gash. Mr. Rogers fell against the side of the house and the man then left him and attacked Mrs. Rogers who had gone to the outside of the house for the purpose of entering their sleeping room by the window. He struck her three or four times, wounding her severely, and Mrs. R. cried out, "He's beating me," to which Mr. Rogers, who had somewhat recovered from the effects of the blow given him and was now staggering across the floor, cried out, "I'll fix him," upon which the man left. The man knew that Mr. Rogers had a loaded revolver with him, and was most likely afraid to continue the assault. This revolver Mrs. Rogers had just taken from the buggy and brought into the house, and it was this revolver which the man was searching for, when he found and took the hatchet which he used. Mr. & Mrs. Rogers then made all possible haste to go to the house of Mr. Andrews, and on their way were seen by Geo. Locke, just returning from Woodbridge. Mrs. R. cried out "Murder," which attracted Geo.'s attention, and he took them in his wagon, bruised and bleeding as they were, and conveyed them to Mr. Andrews'. Medical aid was immediately summoned and men are out searching for the scoundrel.