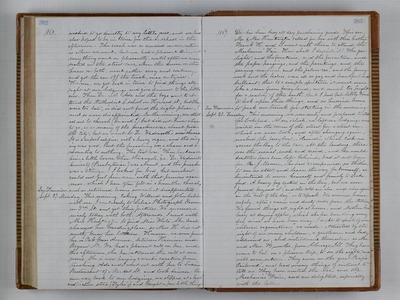 1869. wished to go directly to my little ones, and we had also hoped to be in time for the S. school in the afternoon. The coach was as crowded on our return as when we went, but we had a pleasant drive, and everything went on pleasantly, until after we were seated in the street cars, when the driver or the horse, or both, went rather awry and contrary, and got the car off the track, once or twice. However, we got back in time to find things all right at our lodgings, and give dinner to the little ones. Then Dr. with Ada and the boys went to attend the Methodist S. school on Howard st., but they were too late, or did not find the right place, and so were disappointed. In the evening, we started out to church (Dr and I) but did not know where to go, as so many of the preachers were absent from the City, but we went to Dr. Wadsworth's new church. It is a superb edifice, with a heavy organ, and the singing was good. But the preaching was a sham and amounted to nothing. The text was, "Thon has to made him a little lower than the angels," etc. Dr. Wadsworth himself (Presbyterian) was absent, and the preacher was a stranger. I looked for God, but somehow could not feel him near with that precious nearness, which I have often felt in a humbles church, San Francisco, and so returned home somewhat disappointed. Sept. 27. Monday. This morning, taking Willard and John Calian with me, I went early to Silva's Photograph Rooms, on 3rd. St. and got their pictures. We succeeded nicely today with both. Afterwards, I went with Mrs. Huntington to find Miss White. She had changed her boarding place, so Mrs. H. did not exactly know her location. However, we soon found her on Oak Grove Avenue, between Harrison and Bryant Sts. We had a pleasant call on her, and this afternoon, she has returned the call at our rooms. She is now having a week's vacation from teaching. Ada and I went out with her to Swaine's Restaurant of Market St. and took dinner. On our way back to our lodgings, we stopped at a book and picture store (Tyler's) and bought a few little things. 1869. Dr. has been busy all day purchasing goods. This eve, Mr. & Mrs. Huntington called for me with their brother Frank H. and I went with them to attend the Mechanics' Fair. How shall I describe it? The gaslights, and the fountains, and the furniture, and the paper-hangings, and the paintings, and the sewing-machines, and the palace-car, and the fancywork and the ladies, were all so gay and beautiful and brilliant, that to a simple spectator it must seem like a scene from fairy land, and much too bright for a reality of this earth. But I had but little time to look upon these things, and so hurried home San Francisco. to pack our trunk for starting in the morning. Sept. 28. Tuesday. This morning, we rose early and prepared to start for Lockeford. At six o'clock, we left our lodgings and waited on the corner of the street for a street car, which we soon took, and after changing again, reached the ferry boat, "Alameda," which took us across the Bay to the cars. At the landing, there was the usual rush and crowd, and Ida would doubtless have been left behind, had it not been for Mr. J. Brown, who had accompanied us thither to see no start, and learn the way for himself, as he intends to more himself and family to Lockeford. A heavy fog rested on the Bay, but we soon passed beyond it, and the cold air also, and were again in the "heat of the day" so to speak. We arrived home safely, after a warm and dusty ride from the Station. We found things all right at home, and Mother here busy at drying apples, which she has been doing everyday since we have been away. I ought to speak of some railroad acquaintances we made. Attracted by the right of our many children, a gentleman and lady addressed us, and introduced themselves as Mr. and Mrs. Knowles, from Chicago. Ill. They have come to Cal. on a pleasure trip, to see the sights, and will soon return. They came on the great "Pacific Railroad," and had many things of interest to tell us. They have visited the Sac. and the Mechanics Fairs, and are delighted, especially with the latter.