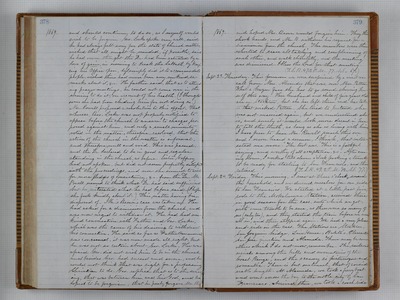 1869. and should continue to do so, as I myself would wish to be forgiven. Geo. Locke spoke very well, said he had always felt sorry for the slate of church matters, wished that all might be mended, if possible, said he had never thought the Dr. had been actuated by a love of gain, in seeming to break the Sabbath, by keeping his office open, but simply did it to accommodate people, wished there had never been any unkind remarks about it, etc. He further said, that as to attending prayer-meetings, he could not come over in the evening to do it, on account of his health. (I thought some one had been chiding him for not doing so.) Mr. Rowell proposed a resolution to this effect. That whereas, Bro. Locke was not properly notified to appear before the church to answer to charges proposed against him, and only a small minority voted in the matter, therefore, resolved, that the action of the church in the matter is informal, and therefore null and void. This was passed, and the Dr. declared to be in good and regular standing in the church, as before. Sister Geffroy had not spoken, but did not seem perfectly satisfied with the proceedings, and now she seemed to wish for more pledges of consistency, etc. from the Dr. Mr. Powell seemed to think what Dr. had said sufficient but he reiterated what he had before said. (I hope she feels kindly about it.) This matter having been disposed of, Mr.'s Brown's case was taken up. He had asked for a dismission from the church, and was now urged to withdraw it. He had had unkind conversation with Father and Geo. Locke, which was the cause of his desiring to withdraw his connection. He said as far as Father Hammond was concerned, it was now made all right, but he was not so certain about Geo. Locke. He was afraid Geo. did not wish him to be in the church, and besides Geo. had cursed and swore, and he could not think that was right for a professing Christian to do. Geo. replied that as to the swearing, that was between him and his God, and he hoped to be forgiven, that he freely forgave Mr. B. 1869. and hoped Mr. Brown would forgive him. They then shook hands, and Mr. B. withdrew his request for a dismission from the church. The members were then exhorted to cease all talking and complaining of each other, and walk charitably, and the meeting was dismissed. I bless the Lord for that meeting. (T.S.R. 47. 2 P.M. 77. S.S. 67.) Sept. 23. Thursday. This forenoon we were surprised by a visit or call from Mrs. Alexander that was, now Mrs. Patton. What a brazen face she has to go round showing herself this way. Her husband and child of five years old are in Stockton, but she has left them and has taken to that wicked Patton. She tried to pretend she was not married again, but we understand she is, and surely it would look more decent in her to tell the truth, as long as she is living with him. I have been to hear Mr. Rowell preach this eve and I never heard a sermon, I think, that interested me more. "The text was, "This is a faithful saying, and worthy of all acceptation" etc. After coming home, I worked till eleven o'clock packing a trunk to be ready for starting to San Francisco, and then retired. (T.S.R. 49. 2 P.M. 82. S.S. 77.) Sept. 24. Friday. This morning, I rose at three o'clock, served the household, and we dressed ourselves for our ride to San Francisco. We started at a little past five, rode to the Mokelumne Station, arrived there in good season for the cars, into which we got, with some trouble to be sure, as there were so many of us (only ten), and they started the train before we were all in, and then stopped again. We had a very pleasant ride in the cars. The Stations are, Stockton, San Joaquin bridge, Line House, Banta's, Pleasanton San Jose junction and Alameda. There may be some others which I do not now remember. The railroad minds among the hills and mountains of the Coast Range, and the scenery is picturesque and romantic. There is but one tunnel, that of considerable length. At Alameda, we took a ferry boat and went across the bay to the noble city of San Francisco. Arrived there, we took a coach ride