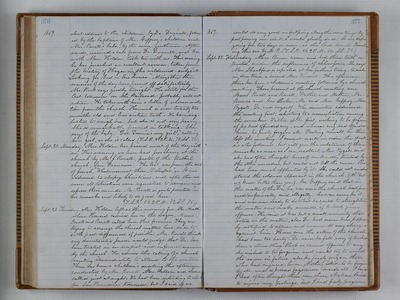 1869. short address to the children by Dr. Dwinell, followed by the baptism of Mr. Geffroy's children and Mr. Powell's babe, by the same gentleman. Afterwards, received a call from Dr. Dwinell, and he, with Mrs. Holden, took tea with us. This evening, he has preached an excellent sermon, taken from the history of Hagar in the wilderness - subject. Looking for God in his house. Altogether the exercises of the day have passed off satisfactorily. Mr. Rock says goodby tonight. He starts for the East tomorrow on the Railroad - probably will not return. He takes with him a letter of recommendation from the church. Hannah is now twenty two months old and has sixteen teeth. We have neglected to weigh her, but she is not very heavy. She is remarkably forward in talking. She says of the baby, "Dat Donnie's my girl," calling him girl, as she is called. (T.S.R. 48. 2 P.M. 78. S.S. 70.) Sept. 20. Monday. Mrs. Holden has passed most of the day with us. This evening, we have had preaching at the church by Mr. J. Rowell, pastor of the Bethel church, San Francisco. The text was from the book of Jonah, "What meanest those. O sleeper, "&.c It was addressed to sleepy Christians, and after the sermon all Christians were requested to remain and express their minds. Mr. Rowell is quite pointed in his remarks, and likely to do good here. (T.S.R. 50. 2 P.M. 83. S.S. 75.) Sept. 21. Tuesday. Mrs. Holden left us this morning for Mr. Heath, where Howard carried her in the wagon. Messrs. Powell and Rowell called here this forenoon. They are trying to arrange the church matters here, so as to settle past differences, if possible. Mr. Rowell thinks any disinterested person would judge that Dr. has been treated in an unjust and informal manner by the church. He advises the calling of a church meeting immediately to attend to the matter. There has been a children's meeting this afternoon conducted by Mr. Rowell. Mrs. Wallace and Susie called just at night. We had been intending to start for San Francisco tomorrow, but I said if we 1869. could do any good in helping along the meetings by postponing our visit, I would gladly do so. So we defer going for two days or more, as the Lord directs. Preaching this eve by M. R. (T.S.R. 54. 2 P.M. 80. S.S. 71.) Sept. 22. Wednesday. Mrs. Bacon came and had three teeth extracted, under the influence of chloroform. She says Mrs. Shackford is expected at her father's today, to make in due time, a second Mrs. Vincent. This afternoon, there has been a children's meeting followed by a church meeting. Those present at the church meeting, were Messrs. Powell and Rowell. Father and Mother, Mr. Brown and Geo. Locke, Mr. and Mrs. Geffroy, Mrs. Rygall, Dr. and myself. The ministers addressed the meeting first, exhorting to a reconciliation among the numbers. Father spoke first, wishing to be forgiven if he had offended any, and whereas any had offended him, he freely forgave all. Feeling unwell, he then left the meeting. I cannot recall in order the speakers who followed, but will give the substance of their remarks, as near as I can recollect. Mrs. Pygall said she had often thought herself unkindly treated by the other members, but could not tell the cause. She had been much afflicted by it. She could not understand the coldness apparent in the church. (Ah! but we know better than you.) Mr. Geffroy said that in the matter of the Dr. he was sure the church had proceed informally and illegally, he was sorry for it, and was now ready to do what he could to straighten the matter and make amends, if he had given offence. He said it was but a small minority that voted in the matter, also Dr. had never been properly notified to appear and answer to any charges against him. He was sure the action of the church had been too hasty. Dr. said he felt sorry if he had been a stumbling-block or caused offence to any, he wished to be forgiven, and would try to avoid the same in future, also he freely forgave those who had injured him. Mother asked to be forgiven by all, and expressed forgiveness towards all. I said I had often thought there were those who had tried to injure my feelings, but I had freely forgiven