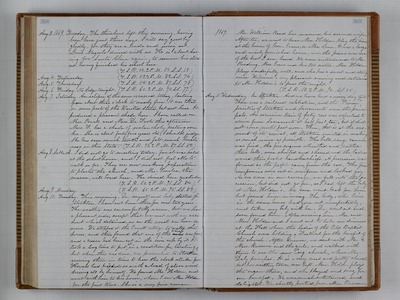 Aug. 3. 1869. Tuesday. The threshers left this morning, having been here just three days. I will say goodby gladly, for they are a rude and noisy set. Louis Megerle dined with us. He is about learning for Santa Clara again, to resume his studies, having finished his school here. (T.S.R. 54. 2 P.M. 83. S.S. 68.) Aug. 4. Wednesday. (T.S.R. 53. 2 P.M. 83. S.S. 74.) Aug. 5. Thursday. (T.S.R. 54. 2 P.M. 87. S.S. 78.) Aug. 6. Friday. No Lodge tonight. (T.S.R. 60. 2 P.M. 90. S.S. 77.) Aug. 7. Saturday. An eclipse of the sun occurred today, lasting from about three o'clock to nearly five. It was total in some parts of the United States, but not here. It produced a pleasant shade here. I have called on Mrs. Powell and Mrs. Dr. Foote this afternoon. Mrs. F. has a shade of melancholy resting over her. She is about fortyfive years old, I should judge. She has seen much trouble and felt much loneliness in this State. (T.S.R. 56. 2 P.M. 87. S.S. 83.) Aug. 8. Sabbath. I did not go to meeting today, for it was held at the schoolhouse, and I did not feel able to walk so far. They are now making preparations to plaster the church, and Mr. Emslee, the mason, will board here. He dined here yesterday (T.S.R. 60. 2 P.M. 91. S.S. 84.) Aug. 9. Monday. (T.S.R. 65. 2 P.M. 95. S.S. 83.) Aug. 10. Tuesday. This morning, Dr. myself and baby started for Stockton. I have not been there for over two years. The weather was uncomfortably warm, but we had a pleasant ride, except that we met with an accident which detained us on the road an hour or more. We stopped at the Everett cottage to water the horses, and there found that one of the wheels was fast, and a crease had been cut in the iron axle by it. It took a long time to put it in a condition for taveling, but when this was done, we proceeded to Stockton, arriving there in time to hear the clock strike four. Howard had proceeded us with a load of store wood, driving all by himself. We found Mr. Holden, and went with him to his house, when I saw Mrs. Holden for the first time. She is a very fine woman. 1869. Mr. William Read has married his second wife. After tea, we went to hear Mrs. Holden play the piano at the house of Gen. Evans, or Mrs. Lane. It was a large and nicely furnished house, and the piano was one of the best I ever heard. We were introduced to Mr. Reading, Mrs. Evans and her two sisters. Mrs. Holden plays wonderfully well, and she has a sweet and strong voice We passed a very pleasant evening and returned to Mr. Holden's to pass the night. (T.S.R. 68. 2 P.M. 94. S.S. 85.) Aug. 11. Wednesday. In Stockton. And we have had a noisy day of it. There was a railroad celebration, and the "Pioneer" Societies of Stockton and Sacramento were the principals. An excursion train of forty cars was expected to arrive from Sacramento at half past ten, but it did not come until past noon. Then, that is at the moment of its arrival, all Stockton united in making as much noise as possible. The bells sang, cannon was fired, the fire engines whistled and rattled their bells, men shouted and cheered and the ladies waved their pocket handkerchiefs. A procession was formed as the people came from the cars. The fire companies were out in uniform and looked gay. As we were in our carriage, we fell into the procession, but did not go far, as I had left the baby at Mrs. Holden's. We soon went back for him but found him missing. The lady, who lives in the same house had gone out unexpectedly, and taken my baby with her. Dr. went out and soon found him. After nursing him, Mr. and Mrs. Holden and I went out to take our dinners at the Hall where the ladies of the Old Baptist Church were holding a Festival for the benefit of the church. After dinner, we met with Mr. & Mrs. Russem and the girls, and walked with them to see the new Cong. church, where Mr. Daly preaches. It is a very neat and pretty church but has neither tower nor bell. Mrs. Holden plays the organ there, and she played and sang for our benefit. We were much entertained and delighted. We shortly parted from Mr. Russem