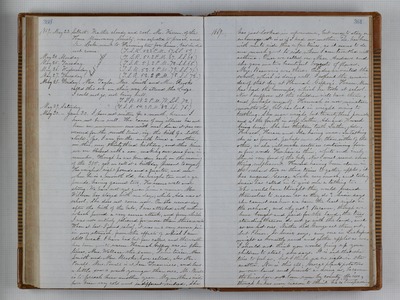 1869. May 23. Sabbath. Weather cloudy and cool. Mr. Warren, of the Home Missionary Society, was expected to preach, and Geo. Locke went to Farmington for him, but he did not come. (T.S.R. 53. 2 P.M. 67. S.S. 59.) May 24. Monday. (T.S.R. 50. 2 P.M. 67. S.S. 62.) May 25. Tuesday. (T.S.R. 51. 2 P.M. 72. S.S. 65.) May 26. Wednesday. (T.S.R. 52. 2 P.M. 79. S.S. 71.) May 27. Thursday. Cool weather. (T.S.R. 52. 2 P.M. 78. S.S. 72.) May 28. Friday. Mrs. Taylor, Mrs. Smith and Mrs. Brooks called this eve on their way to attend the Lodge. I could not go, not being well. (T.S.R. 58. 2 P.M. 78. S.S. 72.) May 29. Saturday. (T.S.R. 54. 2 P.M. 83. S.S. 76.) May 30. - June 30. I have not written for a month, because I have not been well. The cause of my illness has not been an uncommon one with me, since it has now occurred for the ninth time, viz. the birth of a little child. Yes, I am for the ninth time a mother, on this, my thirtythird birthday, and this time we are blessed with a son, making our sons fire in number. Though he was born very early on the morning of the 31st, yet we call it a birthday present to myself. He weighed eight pounds and a quarter, and now when he is a month old, he weighs ten and a gr. pounds, having gained two. He seems well and strong. We have not yet given him a name. Mrs. Wilcoxon has stayed with me days; while Ada was at school. She does not come now. On the second day after the birth of the babe, I was attacked with asthma which proved a very severe attack, and from which I was not entirely relieved for more than three weeks. When at last I found relief, it was in a very severe pain in my stomach, from the effects of which I am still weak. I have had but few callus, and the weather has been quite warm. Hannah Geffroy was in three times, Mrs. Wallace the same, Susie twice, Mrs. Smith and Mrs. Brooks have called, also Mr. Powell. Mrs. Powell is at San Francisco, and has a little son a week younger than ours. Mr. Powell is to preach here another year. My mothers visits have been very cold and indifferent indeed. She 1869. has just looked in upon me, but never to stay or encourage. It is as if I had no mother. Dr. has been with me to ride three or four times, as it seems to do me much good to ride when I am troubled with asthma. Once we called on Mrs. Andrews and she gave me two beautiful bouquet of flowers. Mrs. Beawvais was there. One day we visited the school, which is doing well. I spent the remainder of that day at Hannah Geffroy's. Horace Mann has had the mumps, which he took at school. Now I suppose all the children will have them, and perhaps myself. Hannah is now nineteen months old, but has lost in weight owing to teething. She now weighs but twenty three pounds, and is the fourth in size Luther, Ada and Howard being larger. She has thirteen teeth, Luther, Ada, Howard, Horace and Ida having more. In talking she is as forward, perhaps more so, than either of the others, as she will make sentences containing four or five words. Her hair is thin, white and curly. She is very fond of the baby. Now I must record something unpleasant. Howard having been down in the orchard two or three times to gather apples, it has angered George Locke very much, and today Susie has called in to give me a talking to. Who would have thought they would persuade themselves to reason so as they do? Susie says she cannot see how we have the least right in the orchard, and why not? Because, though we have bought and paid for the land, the trees standing thereon do not go with the land, and so are not ours. Neither did George set them out, but Elmer. So Susie says, any one in Lockeford might as honestly send and gather apples as we. "I should not think you would bring up your children to steal," she says. It is sad that she tries to feel so, but I think we are right in the matter. Nor is this all. George plants potatoes on our land and persists in doing so, because the lines have not been run by county officers, though he has every reason to think he is trespassing