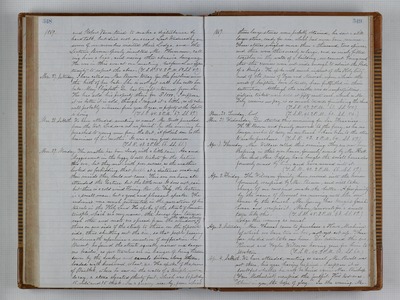 1869. and Robert Vance tried to make a disturbance by hard talk, but did not succeed. Last Wednesday eve some of our members visited their Lodge, and the Lecturer Brown openly insulted Mr. Plummer, calling him a liar, and using other abusive language. He was in this eve at one meeting, but found no opportunity to repeat the abuse. (T.S.R. 50. 2 P.M. 63. S.S. 57.) Mar. 27. Saturday. I have called on Mrs. Brown today, for the first time since the birth of her babe. She is not yet well. She calls her babe - Mary Elizabeth. Dr. has tonight returned from Sac. He has sold his property there for $ 1000. I suppose it is better it is sold, though I regret it a little, as its value will probably increase from year to year, as property at the Capital is doing. (T.S.R. 45. 2 P.M. 67. S.S. 59.) Mar. 28. Sabbath. We have attended meeting as usual. Mr. Powell preached from the text, "Lord, save us; we perish." In the evening he preached to young men from the text, "A foolish son is the heaviness of his mother." It was a very good sermon. (T.S.R. 48. 2 P.M. 66. S.S. 61.) Mar. 29. Monday. The weather has been cloudy with a little rain. Ada and Maggie went in the buggy to sell tickets for the lecture this eve, but they met with poor success, as the weather looked so forbidding, that people at a distance made up their minds they could not come. This eve we have all attended the lecture but the little ones. It does not rain but there is a cold wind blowing. Rev. Mr. Daly, the lecturer, is a small man, but a good and pleasant speaker. The audience were much interested in the narration of his travels in the Holy Land. He spoke of the streets of Constantinople, which are very narrow, the houses lean towards each other and mats are spread from the windows in other upper stories of those on one side of the streets to those on the opposite side, thus shutting out the air, so that people passing underneath experience a sensation of suffocation. In Baront, he found the streets equally narrow and dangerous besides, as foot travelers are in danger of being trodden down by the donkeys and camels driven along them, loaded with brushwood, wheat, etc. He spoke of the ruins of Banlbek, where he saw in the walls of a temple now in delay, a stone elevated thirty feet, which was 60 feet long 15. wide and 15 thick. In a quarry near by, from which 1869. these large stones were probably obtained, he saw a still larger stone, ready for use, which had never been removed. These stones weighed more than a thousand tons apiece, and there were others nearly as large, and so nicely fitted together in the walls of a building, no cement being used, that the crevices were not wide enough to admit the blade of a knife. He spoke with much interest of the Holy City, and of the ruins of Tyre and Nenivah, upon whom the words of Scripture have literally been fulfilled in their destruction. Although the weather was so unpropitious, sixtysix tickets were sold at fifty cents each, which as Mr. Daly receives no pay, is so much towards finishing the church. (T.S.R. 47. 2 P.M. 61. S.S. 55.) Mar. 30. Tuesday. Cool. (T.S.R. 41. 2 P.M. 60. S.S. 54.) Mar. 31. Wednesday. Dr. started this morning for San Francisco. H. H. Brown and family moved to the ferry, as he no longer wishes to carry on our Ranch. I have been to the store to make purchases. (T.S.R. 43. 2 P.M. 64. S.S. 59.) Apr. 1. Thursday. Mrs. Wallace called this evening. They are now house keeping in their own house, formerly owned by Mr. Kett. Mr. and Mrs. Geffroy have bought the small house also formerly owned by him, and have moved into it. (T.S.R. 40. 2 P.M. 66. S.S. 59.) Apr. 2. Friday. The Wilcoxon family have moved into the house formerly occupied by Mr. Brown, and will take charge of our cows and make the butter. A Jew family by the name of Bromel are moving into the new house by the church. Mr. Young has bought Josiah's house and occupies it. Many removals for a small town like this. (T.S.R. 45. 2 P.M. 68. S.S. 59.) Lodge this evening as usual. Apr. 3. Saturday. Mrs. Thomas came to purchase a Howe Machine of which we have two in box, not yet set up. Therefore she did not take one home. Dr. returned this eve, Howard and Taylor Wilcoxon having gone for him to Stockton. (T.S.R. 42. 2 P.M. 68. S.S. 64.) Apr. 4. Sabbath. We have attended meeting as usual. Mr. Powell was not there, his year having expired. I suppose it is doubtful whether he will be hired again. Mr. Bishop (Free Methodist) occupied the pulpit. His text was, “Christ in you, the hope of glory." In the evening, Mr.