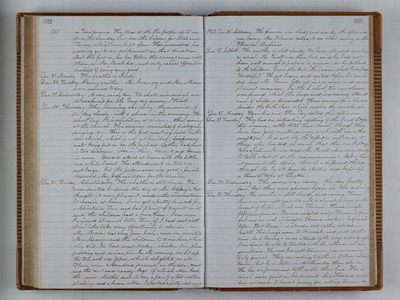 1868. on Temperance. He tried to stir the people up to enforce the Sunday Law on the Saloon, Jew Stores and Tavern, which were kept open. He succeeded in raising quite an excitement in that direction. But the fact is, he has taken the wrong course with them, as Mr. Powell did, and only raises opposition instead of doing any good. Dec. 21. Monday. The weather is cloudy. Dec. 22. Tuesday. Rainy weather. Mr. Guernsey and Mrs. Moore were married today. Dec. 23. Wednesday. A very rainy day. We shall rain enough now to make up for the long dry season, I think. Dec. 24. Thursday. The morning was rainy - the remainder of the day cloudy, with a shower in the evening. The school had their exhibition at closing, this evening at the church. The exercises consisted of dialogues singing, etc. This is the first meeting held in the new church, which is not yet finished, temporary seats being put in for the purpose. Luther had part in two dialogues, Ada in there, Howard and Horace in none. Howard staid at home with the little ones while I went. The attendance of visitors was not large, but the performance was good. Josiah borrowed Mr. Geffroy's organ for the occasion. Dec. 25. Friday. Christmas Day. The weather is still cloudy. We were invited to spend the day at Mr. Geffroy's, but thought it more pleasant, under the circumstances to remain at home. So we got a pretty live oak for a Christmas Tree and had plenty of presents on it, and the children had a fine time. I am sure I enjoyed it much better than if I had met with those who take every opportunity to slander us. Mr. Brown was away from home, and we invited Mrs. Brown and the children to dine here, which they did. We had roast turkey, chicken pie, plum pudding and mince pie. In the evening, we lit up the tree with wax tapers, which delighted us all. There were a hundred presents on the tree, counting the nut and candy-bags, of which Ada had the most. Mother sent to me a pair of white woollen stockings and a linen collar. I also had a pretty shell covered box. 1868. Dec. 26. Saturday. The forenoon was cloudy and windy, the afternoon very rainy. Mrs. Wilcoxon called to see about sewing on the Florence Machines. Dec. 27. Sabbath. The weather is still cloudy. We have attended meeting as usual. Mr. Powell was there, but said he had not been well enough to prepare a sermon, so he talked to the children from the text, “His name shall be called wonderful." He got hoarse and excited before he concluded, and Mr. Brown followed in an easier and more pleasant manner. In the S. school, two new classes were formed, which the large and increasing attendance of children demanded. There are now five classes besides the Bible class, which makes the number six. Dec. 28. Monday. Frankie and Ellen Day called this afternoon. Dec. 29. Tuesday. They had an interesting meeting of the Band of Hope this evening, rather better than usual, though they have had good meetings every week, with one or two exceptions. It is not by the effort or influence of those who boasted so much, that they are kept up. The Lecturer Brown and Mr. Powell were very ready to talk about it at the commencement, but when it comes to the doing, that is a different thing, though Mr. Powell says he started and kept up a Band of Hope at Clayton. Dec. 30. Wednesday. The morn was rainy, the day pretty fair, but there were showers again in the evening. Dec. 31. Thursday. The weather is still cloudy and rainy. Horace Mann is now eight years old and is almost as large as the largest of the four, which was Howard. Horace weighs fiftynine pounds, Howard weighed sixty. Horace is four feet and one inch in height, Howard was but a half inch taller. But Horace's is slender and rather delicate in health. His lungs seem to be weak, and just at this time, he is having a severe attack of the croup and a cough. I am afraid he will be troubled with the asthma, as I am sometimes. He and Ida will tomorrow commence a Daily Journal. They are reading together in Willson's Second Reader, but he is better in Arithmetic than she is. He has six permanent teeth, as the others had. He is much more quiet in his pursuits than Howard and does not seem to have a fancy for riding horses, as