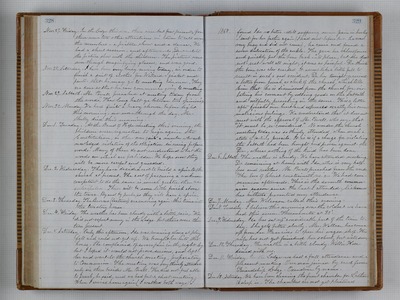 Nov. 27. Friday. In the Lodge this eve, there were but few present, for there were two other attractions in town to call away the members - a picture show and a dance. We had a short session, and afterward, Dr. went to the picture show with the children. The pictures were seem through magnifying glasses, and were good. Nov. 28. Saturday. I have been very busy sewing today, in order to finish a suit of clothes for Willard - jacket and pants - that he may go to meeting tomorrow. They are done so that he can commence going to meeting. Nov. 29. Sabbath. Mr. Powell preached at meeting today from the words." How long halt ye between two opinions." Nov. 30. Monday. We had quite a heavy shower before light this morning, no more through the day, Mr. Shelly died this morning. Dec. 1. Tuesday. At the Band of Hope meeting this evening, the children were requested to sign again the Constitution, as there were quite a number who acknowledged violation of the obligation in using profane words. Many of them do not understand what the words are which careful and guarded. Dec. 2. Wednesday. They have decided not to build a spire to the church at present. The cost of procuring a workman competent to do the same is much greater than was anticipate. There will be some little finish above the tower. By and by perhaps they will have a spire. Dec. 3. Thursday. The Browns (lecturer) are moving - again this time into the two story house. Dec. 4. Friday. The weather has been cloudy with a little rain. We did not expect many in the Lodge but there were thirteen present. Dec. 5. Saturday. Early this afternoon, Ida was running along at play, fell and could not get up. We brought her into the house. She complained of severe pain in the right leg, but I hoped it would not prove serious, and left her and went to the church meeting, preparatory to Communion. The meeting was very thinly attended only six there besides Mr. Powell. He did not feel able to preach, he said, and we had but a short meeting. When I arrived home again (I walked both ways) I 1868. found Ida no better - still suffering severe pain in her leg I sent for her father again ( I had sent before but he was very busy and did not come), he came and found a severe dislocation of the ankle. He gave her chloroform and quickly put the bone back in to place, but she did not rest well all night, it was so painful. Dr. think the bone was also cracked. It seems like a little fall to result in such a sad accident. Dr. has tonight received a letter from Josiah, as clerk of the church, which tells him that he is dismissed from the church, for violating his covenant by selling goods on the Sabbath and wilfully persisting in the same. This a letter after Josiah "own heart" and expressed exactly his own malicious feelings. We understand that it does not meet with the approval of Mr. Powell, who says that it must be reconsidered. No wonder the church meeting today was so thinly attended, when such a state of feeling prevails. It is as if a charge for violating the Sabbath had been brought and proven against the Dr., whereas nothing of the kind has been done. Dec. 6. Sabbath. The weather is cloudy. We have attended meeting. Dr remaining at home with Ida, who is very helpless and restless. Mr. Powell preached from the words. The love of Christ constraineth us, etc. We had communion afterwards. This is the seventh communion season since the last I attended. Sickness has hitherto prevented my attendance. Dec. 7. Monday. Mrs. Wilcoxon called this evening. Dec. 8. Tuesday. I believe this morning was the coldest we have had this season. Thermometer at 30º. Dec. 9. Wednesday. Ida has sat up a considerable part of the time today. She gets better slowly. Mr. Wallace has come up from San Francisco to open his wagon shop. His wife has not yet finished her school but will soon Dec. 10. Thursday. The weather is a little cloudy. Willie Kerr dined with us. Dec. 11. Friday. In the Lodge we had a full attendance and a pleasant meeting. One man joined by card from Friendship Lodge - Oxendine by name. Dec. 12. Saturday. We have been clearing the front chamber for Luther to sleep in. The chambers are not yet plastered.