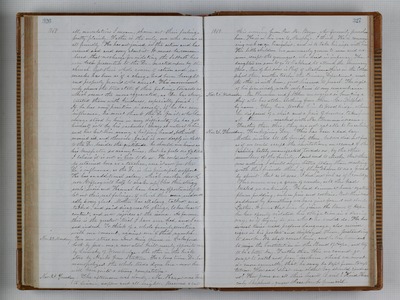 1868. all, our relatives I mean, shown out their feelings pretty plainly. Father is the only one who seems at all friendly. He has not joined in the action and has seemed sad and song about it. It must be remembered that no charge for violating the Sabbath has ever been presented to the Dr. or acted upon by the church. Yet their whole course of action and remarks has been as if a charge had been brought and properly proved to be correct. This movement only shows the true state of their feelings towards us, which seems the more aggravated, as Dr. has always. treated them with kindness, especially Josiah. If he has any position in society, if he has any influence, he must thank the Dr. for it, who has always stood by him in any difficulty he has got himself into by his rashness (always so natural to him) and has lent him many a helping hand, both with monied aid, and otherwise, Josiah is now deeply in debt to the Dr. besides the gratitude he should owe him as his benefactor so many times. But he feels no gratitude I believe it is not in him to do so. He could not now be retained here as a teacher, were it not for the Dr.'s influence, as the Dr. is his principal support. He has an additional salary, which neither Geo. L. nor Geffroy will help to make up (bless their stingy souls). Susie and Hannah have had an opportunity to let out their real feelings, of which they were undoubtedly very glad. Mother has all along, talked and talked, and said disagreeable things, to her hearts content, and now rejoices at the issue. As for me, this is the greatest trial I have ever had, and I am sad indeed. To think of a whole family uniting with one consent, against one of their number. Nov. 23. Monday. Two new stores are about being opened in Lockeford. both by Jews - one, a new store built nearly opposite ours, by Levinsky of Woodbridge - the other in the brick store by Marks from Stockton. For a long time, Dr. has monopolized the whole trade done here now he will have quite a strong competitive. Nov. 24. Tuesday. The afternoon was cloudy. Mr. Harrow was here to dinner, supper and all night. Received a call 1868. this evening from Rev. Mr. Bryce, who formerly preaches here. He is on his way to Murphy's, I think. He is commencing work as an Evangelist, and is to take his wife with him. His little children are now nearly grown to men and women, except the youngest who died in infancy. The daughters are soon to go to Oakland, to attend the Seminary there. One of his sons is Prof of Mathematics in the College School there, another teacher the Primary Department, and the other is with him, just licensed to preach. The sight of his face vividly recalls "early times" to my remembrance. Nov. 25. Wednesday. Mr. Plummer and J. Stoker are engaged in hunting a thief who has stolen clothing from them - Geo. Wilford by name. They have tracked him to Woodbridge, where he disposed of a shirt and a pair of drawers taken from Mr. Plummer, marked with Mr. Plummer's name, Further than this, they are not yet able to trace him. Nov. 26. Thursday. Thanksgiving Day. This has been a sad day. Mother invited all the family there, but we did not feel as if we could accept the invitation, on account of the feeling lately manifested towards us, by the other members of the family. I sent word to Mother that there was nothing I should enjoy betters today than meeting with the friends there, if they had shown to us a friendly spirit. But as it was, I did not feel as if I could go. Her answer was, a query of wonder, as to who had treated us unkindly. We had dinner at home - oysters plum pudding, mince pies and cookies. But this was saddened by something we have just found out about Luther. It seem that since he joined the Band of Hope he has openly violated his obligation in a daring way, as if trying to see what he could do. He has several times used profane language, also carried cigars in his pockets and displayed them, pretending to smoke. We shall correct him, and he has promised to resign the Constitution in the Band of Hope, and try to be a better boy. Farther than this, we cannot go, except to "watch and pray" for him, which we must do more earnestly, that he may be kept from temptation. How sad that our oldest boy should conduct so! How prove are all their hearts to evil! Kind Heavenly Shepherd, guard these lambs from evil.