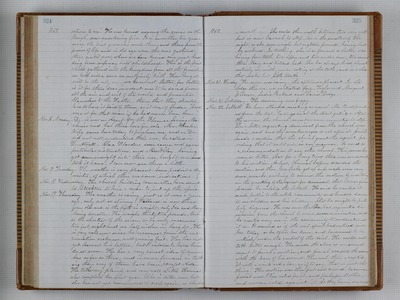 1868. return to me.” He was buried among the graves on the Ranch, now numbering five. It is more than ten years since the first grave was made there, and those from the prime of life and in old age were the ones gathered there until now, when we have buried one just budding from infancy into childhood. This is the first child gathered into the kingdom from all the families on both sides, save an untimely birth. How long it will be the only one, we know not. Better for better, is it for these dear innocent ones to be saved from all the sin and evil of the world and presented blameless to the Father, than that they should live to have it said of them, as it was of Judas, "Good were it for that man if he had never been born." Nov. 16. Monday. Dr. is now an Agent for the Florence Sewing Machines and has three here for sale. Mrs. Wheeler Wiley came here today to purchase one, and as Dr. did not well understand their use, he called in Dr. Atwell. Clara Flanders soon came and gave particular instructions, and Mrs. Wiley, having got some insight into their use bought one and took it home. I can now use them a little. Nov. 17. Tuesday. The weather is very pleasant. Some predict a dry Winter, of which there are some indications. Nov. 18. Wednesday. The church building committee have sent to Stockton to hire a man to put up the spire. Nov. 19. Thursday. The weather is rainy, just as it was a year ago, only not so stormy. Willard is now three years old and is the fifth in weight, only Ida and Mary being smaller. He weighs thirty two pounds, but is the shortest of the seven, as he only measures two feet, eight and one half inches in height. He is very well now since he recovered from the vaccinnation sickness, and growing fast. He has not yet learned his letters, but I intend to have him do so soon. He has a very correct idea of numbers as far as three, and is more forward in talking than any of them have been, except Ada. He talks very plainly and very well. Little Hannah also completes her first year. She is better now, but she has not yet commenced to creep again, as she did 1868. a month ago. She could then walk between two very well but is now too weak to step. She is the smallest of the eight, as she now weighs but eighteen pounds, having lost by sickness. In teething, she is as forward as Luther was having four teeth, two upper and two under ones, two more than Mary and Willard had. She has always lived almost entirely on milk, never eating at the table, and is a child that makes but little trouble. Nov. 20. Friday. The morn was rainy, the afternoon pleasant. In the Lodge this eve, we initiated four, Taylor and Margaret Wileoxon, Sadie Packard and David Dodge. Nov. 21. Saturday. The morning was foggy. Nov. 22. Sabbath. We have attended meeting as usual. Mr. Powell preached from the text, "Enter ye in at the strait gate," etc. After the service, the church members were requested to stop. Dr.'s letters requesting dismissal from the church was again read and the member urged to act upon it. Josiah made a motion that the church grant the request, providing that it could not, in any manner, be used as a recommendation to any other church. His remarks were so bitter, that for a long time there was no second to his motion. At last, Hannah Geffroy seconded the motion, and then Geo. Locke got up and made some very severe remarks, wishing to amend the motion by inserting in the granting of the request fro dismissal, that it was given because he violated the Sabbath. He said he wanted it made public to the whole community and handed down to our children and his children, that he might be publicly disgraced. He was sure that Dr. had requested dismission from the church to avoid excommunication, and he wanted every one in the community to understand it so. It seemed as if the evil spirit had entered into Geo. today, as he often has done, and he seemed to be entirely under the control of the devil. He could not talk bitter enough. He made the above as an amendment to Josiah's motion, and Josiah accepted the same with the leave of his second. Hannah then accepted it with a wink and a leer, as if to say, "that is just the thing." The motion was then put and carried, because Josiah and Eliza voted for it, and perhaps Mother, and not one voted against it. So they have, one and