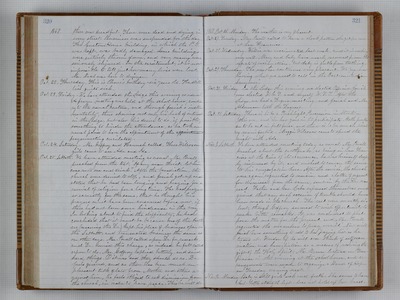 1868. there was dreadful. There were dead and dying in every street. Business was suspended for the day. The Custom House building, in which the P. O. was kept, was badly damaged. Some buildings were entirely thrown down, and very many were seriously injured. In the excitement, it is now impossible to tell just how many lives were lost. Mr. Neal was here to dinner. Oct. 22. Thursday. This is Elmer's birthday - six years old. He still lies quite sick. Oct. 23. Friday. We have attended the Lodge this evening as usual. A prayer-meeting was held at the school-house, contrary to the usual custom, and though Josiah's instrumentality, thus showing not only his lack of interest in the Lodge, but also his desire to do, if possible, something to hinder the attendance, as he took unusual panics to have the appointment of the prayermeeting circulated. Oct. 24. Saturday. Mr. Geffroy and Hannah called. Three Wilcoxon girls came to see Ada and Ida. Oct. 25. Sabbath. We have attended meeting as usual. Mr. Powell preached from the text. "If any man thirst, let him come unto me and drink." After the benediction, the church were desired to stop, and Josiah got up and stated that he had been longing and praying for a revival of religion for a long time. He had prayed so earnestly for the same, that he thought his prayers must have been answered before now, if there had not been some hindrance in the way. In looking about to find the difficulty, he had concluded that it must be because one of the brothers (meaning the Dr.) kept his place of business open on the Sabbath, and transacted business the same as on other days. Mr. Powell called upon Dr. for remarks, and Dr. denied this charge, as indeed he felt called upon to do. Mr. Geffroy replied bitterly, and said hard things. O it was sad they should do so. Dr. feels grieved, and as there has been much unpleasant talk of late from Mother and others against him, he feels obliged to ask dismission from the church, in order to have peace. This he will do. 1868. Oct. 26. Monday. The weather is very pleasant. Oct. 27. Tuesday. Mrs. Powell called to leave a cloak pattern she got for me at San Francisco. Oct. 28. Wednesday. Willie was vaccinnated last week, and it is working very well. Mary and baby have nearly recovered from the effects of vaccinnation, but baby is feeble from teething. Oct. 29. Thursday. The weather continues very pleasant. We are now having what we used to call in the East-an ."Indian Summer." Oct. 30. Friday. In the Lodge this evening morning we elected Officers. Josiah was elected W. C. T. and myself W. V. T. After the Lodge, we had a Degree meeting, and Josiah and Mr. Alderman took the Degrees. Oct. 31. Saturday. There is to be a Torchlight Procession in Stockton this eve, and Dr. has gone in to participate. Both parties are to be out in full force, and there is to be much rivalry manifested. Maggie Wilcoxon came to spend the night with Ada. Nov. 1. Sabbath. We have attended meeting today as usual. Mr. Powell preached about the earthquake, as being in San Francisco at the time of its occurrence, he was himself deeply impressed by it, and wished to convey the same to his congregation here. After the service, the church were again requested to remain, and a letter of request for dismissal from the same, sent in by the Dr. was read. Father and Geo. Locke expressed themselves much grieved that any such occasion of trouble should have been made in the church. The rest were mostly silent, though Geffroy seemed to wish opportunity to make bitter remarks. It was concluded to postpone the matter for the present, and Mr. Powell requested the members to "pray over it." Now will Josiah have something to add to his "praying list" as he terms it. Wonder if he will ever think of self examination and humiliation as a means of receiving the gift of the Holy Spirit. Mr. Brown lectured on Temperance in the evening at the schoolhouse, and arrangements were made to organize a Band of Hope on Tuesday evening next. Nov. 2. Monday. Baby is still quite sick and feeble. She seems to have but little strength left - does not hold up her head.