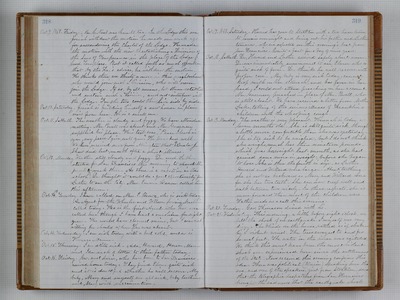 Oct. 9. 1868. Friday. Mr. C. Neal was here to tea. In the Lodge this eve, Josiah withdrew the motion he made our week ago for surrendering the Charter of the Lodge. He made the motion with the view to establishing a Division of the Sons of Temperance in the place of the Lodge of Good Templars. But it called forth so much opposition that by the Dr.'s advice, he withdraw the motion. He thinks there are thirty or more in this neighborhood who would join such a Division, who will never join the Lodge. If so, by all means, let them establish and sustain such a Division, and not interfere with the Lodge. For the two could thus five side by side. Oct. 10. Saturday. Josiah is building himself a new house in plain view from here. It is a small one. Oct. 11. Sabbath. The weather is cloudy and foggy. We have attended meeting. Mr. Powell was absent and Mr. Guernsey supplied his place. His text was, "Peace I leave in you, my peace I give unto you." He preached well. We have received nine from Abington that Uncle J. Shaw died last month after a short illness. Oct. 12. Monday. Weather still cloudy and foggy. Dr. and Luther started for San Francisco this morning to spend the present week there. As there's a vacation in the school, Dr. thought it would be a good opportunity for Luther to see the City. Mrs. Emma Brown called here this afternoon. Oct. 13. Tuesday. I have called on Mrs. E. Brown, who is sick today. An Agent for the Wheeler and Wilson Sewing Machine called today. He is the first Agent who has ever called here though I have had a machine for eight years. He would have cleaned mine, but I was not willing he should when Dr. was absent. Oct. 14. Wednesday. I am sick today with a bad cold, and so is Horace Mann. Oct. 15. Thursday. I am still sick. Ada, Howard, Horace Mann and Ida each a litter to their father today. Oct. 16. Friday. Geo. and Susie, who have been to San Francisco arrived home today. They find Elmer quite sick and it is doubtful whether he will recover. My baby, Mary and myself are all sick, baby teething, and Mary with vaccination. Oct. 17. 1868. Saturday. Howard has gone to Stockton with a two horse team to remain over night and bring out his father and Luther tomorrow, who are expected on this evening's boat from San Francisco. Quite a feat for a boy of nine years. Oct. 18. Sabbath. Dr. Howard and Luther arrived safely about noon. Dr. was immediately summoned to see Elmer who is quite sick of fever. Dr. thinks he will recover with proper care. My baby is very sick today, cannot keep milk on her stomach, and has fever in her head. I could not attend preaching on her account. Mr. Guernsey preached in place of Mr. Powell, who is still absent. We have received a letter from Mother Locke, telling of the serious illness of Franklins children with the whooping cough. Oct. 19. Monday. The weather is very pleasant. Hannah is today eleven months old. She is still quite sick, though a little more comfortable than she was yesterday. She is too sick to be weighed, but I do not think she weighs much less than nineteen pounds, which was her weight last month, as she had gained some more in weight, before she began to lose. She is then the fourth in size, as Luther, Howard and Willard were larger. About teething, she is not as backward as Mary and Willard were for she has two teeth. She can now creep well and walk between two nicely. In there respects, she is more forward than most of the children were. Father made us a call this evening. Oct. 20. Tuesday. Geo. Thomason dined with us. Oct. 21. Wednesday. This morning, a little before eight o'clock, we felt the shock of an earthquake. I myself was very dizzy. The blinds on the house rattled as if shaken by a violent wind. The trees swayed to and for several feet. The water in the river was agitated. We think this must have been the most violent shock eve - experienced here since the settlement of the State. News received this evening confirms this idea. There was political (Union) speaking here this eve, and one of the speakers, just from Stockton, said that the telegraphic despatches from San Francisco brought the sad news that the earthquake shock