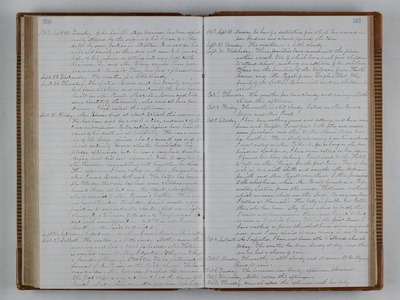 Sept. 22. Tuesday. John Smiths stage business has been effectually stopped by the seizure of his horses, etc. for debt, by some parties in Stockton. It is sad for his wife and family, as there does not seem to be much hope of his reform or getting into any profitable business. Dr. and Mr. Brown arrived home from Sacramento tonight. They have had a pleasant visit. Sept. 23. Wednesday. The weather is a little cloudy. Sept. 24. Thursday. The Lecturer Brown and his family arrived here from Stockton and moved into the new house built for Mr. Powell. Mrs. & Mrs. Brown and two sons constitute the family, who were all here for dinner. Eliza called this afternoon. Sept. 25. Friday. Mr. Peirson died at about 2 o'clock this morning. He has been sick for a week or two, and most of the time unconscious. Intoxicating liquors have been the cause of his death in all probability. He was a member of the Lodge joined about a month ago, and it is not certainly known whether he violated his pledge afterwards, but he was a very hard drinker before and did not reform in time to save his life. Mr. Henshaw was watching with him when he died. This afternoon I have called on Mrs. Marguet and Mrs. Emma Brown, both sick. The latter has fever. She tells me that she has had nine children and buried them all but one, the oldest a daughter, who is married to Mr. Brown's brother. This eve we have attended the Lodge. Josiah made a proposition to surrender the charter, that we might change to a Division of the Lons of Temperance I met with some opposition, but it is not known how the matter will be decided. Sept. 26. Saturday. Called again on Mrs. Emma Brown. She is better. Sept. 27. Sabbath. The weather is a little cloudy. Mother came this morning and had a tooth extracted. Mr. Holden is married again to Mrs. Edgerton. They are to keep a boarding house in Stockton. We have attended the funeral of Mr. Peirson at the brick church. The house was crowded. Mr. Guemsey preached the sermon. The Odd Follows were on and had the charge of the burial. Most of them were strangers from Woodbridge, Sept. 28. Monday. We hear of a destructive fire which has occurred in San Andreas and almost ruined the town. Sept. 29. Tuesday. The weather is a little cloudy. Sept. 30. Wednesday. Three families have moved into the place within a week, two of which have each five children to attend school, making an addition of ten scholars. These are the families of Mr. Wilcoxon from Hawk’s Corner, and Mr. Pygall from Douglass Flat. The family of the Lecturer Brown will send no children to school. Oct. 1. Thursday. The weather has been cloudy and rainy. Mother called this afternoon. Oct. 2. Friday. The weather is still cloudy. Called on Mrs. Emma Brown and Mrs. Powell. Oct. 3. Saturday. I have been walking round and calling, and have came home sick tonight. I went first to the store and made some purchases and then to Mr. Shaw's, to see how his health is. He is slowly recovering from his sickness. I next called on Mrs. Packard, for as long as she has lived in Lockeford, I have never called on her before. I found her busy baking. I next went to the Hotel, to call on Mrs. Ringer for the first time. Found her sick in bed with chills and earache. Mrs. William Smith and Mrs. Pygall were there. I then proceeded to the school house, where Mr. Powell preached a Preparatory Lecture from the words, "Holiness, without which no man shall see the Lord " On my way home I called at Hannah's. Her baby is feeble, but better than she has been. My head ached so badly that I could not long remain there, and I went to bed as soon as I arrived home. This is the first time I have walked as far as the school house since my sickness, and I am afraid it was wrong in me to do so. Oct. 4. Sabbath. As I expected, I have not been able to attend church today. The weather has been cloudy all day, and this eve we had a shower of rain. Oct. 5. Monday. The weather is still cloudy and it seems to be trying hard to rain. Oct. 6. Tuesday. The forenoon was cloudy, afternoon pleasant. Oct. 7. Wednesday. Mother called this afternoon. Oct. 8. Thursday. Hannah called this afternoon with her baby.