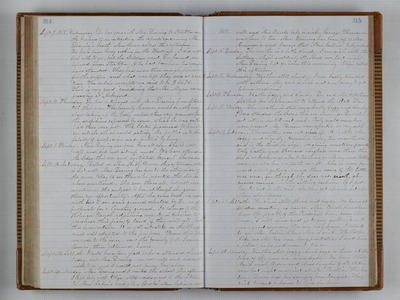 Sept. 9. 1868. Wednesday. Dr. has gone with Mrs. Dearing to Stockton on the business of investigating the reports concerning Mr. Dearing's death. Mrs. Brown called this afternoon. We have been busy cooking for the Festival. I did not feel able to go, but the children went. Dr. has not returned from Stockton. If he had been here, he would have attended. They had more than enough provisions for the supper, and what was left they sold at auction. The entire receipts are said to be $ 66.75. This is very good, considering that Mr. Myers never preaches at Lockeford. Sept. 10. Thursday. Dr. has returned with Mrs. Dearing from Stockton this eve. The County Coroner would do nothing about taking up the body unless there were grounds for the suspicious expressed by some, which he was satisfied there were not. The Editor promised to print an article which would satisfy the public as to the falsity of suspicious made public by him. Sept. 11. Friday. Mrs. Dearing has been here all day. She is not well and did not sit up much. We have attended the Lodge this eve and initiated George R. Sherman. Sept. 12. Saturday. Called on Mrs. H. H. Brown this afternoon, who is not well. Mrs. Dearing has been to the other side of the river today to see those who reported the stories above mentioned. She saw them all, but not one mentioned the subject to her, although she gave them an opportunity. After she came back, we rode with her to see some ground selected by Dr. as appropriate for a Cemetery ground. It belongs to the Holman Ranch adjoining ours. It is desired to purchase this pieces of land of they will sell, but this is uncertain. It is well situated on the bluff and well adapted to the purpose. From this place we rode to the ferry, saw the family of Mr. Isaac Brown, then returned home. Sept. 13. Sabbath. Would have been glad to have attended church today, but Mrs. Dearing was not well and did not wish to go, and I would not leave her alone. Sept. 14. Monday. Mrs. Dearing and I visited the school this afternoon. I left baby with Eliza. Afterwards went to the Store to Mrs. Sabin's and Mrs. Brooks'. Mrs. Sabin is not 1868. well and Mrs. Brooks' baby is sick. George Thomason was here to tea. Mrs. Dearing has been up to Mrs. Crisman's, and learns that Mrs. Gallies' baby is dead Sept. 15. Tuesday. The weather is a little cloudy. I am sick with the asthma, which suddenly attacked me last night. Mrs. Dearing left for home this morning. Eliza called this afternoon. Sept. 16. Wednesday. Weather still cloudy. I am badly troubled with asthma. My cook is sick and gone away to get China medicine. Sept. 17. Thursday. Weather foggy and cloudy. Dr. and Mr. H. H. Brown started for Sacramento to attend the State Fair. Sept. 18. Friday. The weather is still remarkably foggy and cloudy. I have attended the Lodge this eve alone, for Dr. will not return untill next week. Only eight members were present. Mr. Peirson was reported as very sick. Sept. 19. Saturday. The weather does not clear up. It is still cold foggy and cloudy. Hannah is today ten months old and is the third in size, weighing nineteen pounds. Only Luther and Howard weighed more than this. She is as backward about teething as Mary and Willie were, as she has no teeth as yet. She is more forward about getting around than some of the little ones were, for though she does not - crawl, she moves around in the sitting fashion. If I put her to bed in the crib, she can get up and sit up when she pleases. Sept. 20. Sabbath. The air is still thick and foggy. We have attended meeting as usual. Mr. Powell preached from the parable of the Prodigal Son, from the verse, "I will arise and go to my father," etc. It was a good sermon. On my way home, I called to see Mr. Calvin Shaw, who is sick. He looks like one who has been long prostrated. I sent him a pillow, as he had none to lie on. Sept. 21. Monday. Weather still foggy. Such fogs as these at this time of the year are remarkable. We learn that Mr. Daniel Brown and Miss Vaughn of Stockton were last night married at Mr. Powell's. The lecturer Brown and his son are here tonight. They wish to rent a house to live in here.