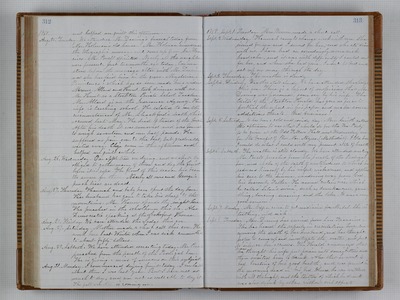 1868. and helped me quilt this afternoon. Aug. 25. Tuesday. We attended Mr. Dearing's funeral today from Mr. Holman's old house. Mr. Holman answered the telegraphic message and came up from San Francisco. Mr. Powell officiated. Nearly all the neighbors were present. Just two months ago today, Emma stood before the marriage altar with Mr. Dearing now she has laid him in the grave. Mysterious Providence! which has so soon made her a widow Messrs. Allard and Hunt took dinner with us. Mr. Hunt is a Stockton Private School Teacher. Mr. Allard is on the Insurance Agency. His wife is teaching school. He related to me the circumstances of Mr. Shackford's death, which occurred last May. He died of tumor of the bowel. After his death it was removed and was found to weigh seventeen and one-half pounds. He suffered no pain even to the last, but gradually wasted away. Eliza came in this afternoon and helped me quilt awhile. Aug. 26. Wednesday. Our apple-trees are dying, and we shall be obliged to gather many of them and dry the fruit before it is ripe. The flood of this season has been too severe for them. Nearly all ours and George's peach trees are dead. Aug. 27. Thursday. Hannah and baby have spent the day here. Her husband has gone to take his sheep to the mountains. Mr. Harrow spends the night here. He preached in the schoolhouse this eve. Also Democratic speaking at the Lockeford House. Aug. 28. Friday. We have attended the Lodge this eve. Aug. 29. Saturday. Mother made a short call this eve. Her work here last winter when I was sick amounted to about fifty dollars. Aug. 30. Sabbath. We have attended meeting today. Mr. Powell preached from the parable of the Prodigal Son. He is giving a series of sermons on this subject. Aug. 31. Monday. I commenced drying fruit today. I am later about than I was last year. But I have not so much to dry, and am not so well able to dry it. The fall weather is coming on. 1868. Sept. 1. Tuesday. Mrs. Brown made a short call. Sept. 2. Wednesday. Hannah came to change work with me. She ironed for me and I sewed for her, and she ate dinner with us. I have had an exceedingly severe sick headache, and it was with difficulty I could sew for her, and when she had gone, I went to bed and sat up no more through the day. Sept. 3. Thursday. The weather is cloudy. Sept. 4. Friday. Weather still cloudy. We have attended the Lodge this eve. There is a report of suspicious that Mr. Dearing was poisoned, some say by his wife. The Editor of the Stockton Herald has gone so far as to publish the report in his paper and make some additions there to. Bad Ausiness! Sept. 5. Saturday. It has been a cold and windy day. Mrs. Smith called this afternoon to see what I would do for the Tea. Party to be given at the Odd Fellows' Hall next Wednesday eve for the benefit of Rev. Mr. Myers. (Methodist). I told her I would do what I could with my present state of health. Sept. 6. Sabbath. The weather is still cloudy. We have attended meeting Mr. Powell preached from the parable of the Prodigal Son, and spoke of the depth of wretchedness to which he reduced himself by his wilful wickedness, and applied his case to the Sinner, wandering away from God, his heavenly Father. He named certain vices which he called "Satan's swine", such as drunkenness, gambling, dancing, swearing and the like. It was a very good sermon. Sept. 7. Monday. Mr. Geffroy come to get medicine for Mabel. She is teething, and sick. Sept. 8. Tuesday. Mrs. Dearing has arrived from San Francisco. She has heard the report in circulation here, concerning the death of her husband, and has thought proper to come up and investigate the matter, and put to silence her accusers. The "Herald" announced that it was thought his wife put poison into some, "Bitters" and then invited him to drink. Also that he went to bed boasting of his good health, and was found in the morning dead in his bed. Whereas, he was watched with all the night, and the "Bitters" of which he drank was also drank by others, without evil effects.