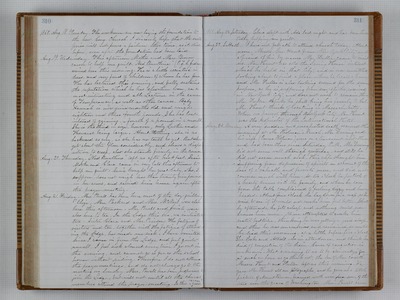 1868. Aug. 18. Tuesday. The workmen are now laying the foundation to the new Cong. Church. I sincerely hope that the enterprise will not prove a failure this time, as it did before, even after the foundation had been laid. Aug. 19. Wednesday. This afternoon Mother and Mrs. Brown came to help me quilt. "Ned Buntline" (E. Z. C. Judson) arrived here this morning. He is a little eccentric in dress, and very fond of children, of whom he has four. He has lectured this evening, and fully sustains the reputation which he has elsewhere won, as a most interesting and able Lecturer in the cause of Temperance, as well as other causes. Baby Hannah is now nine months old and weighs eighteen and three fourth pounds. She has lost intsead of gaining, a fourth of a pound in a month. She is the third in size, however, only Luther and Howard being larger. About teething, she is as backward as any, as she has no teeth as yet. But she gets about the floor considerably, and shows a disposition to creep, also she stands firmly in the corner. Aug. 20. Thursday. "Ned Buntline" left us after breakfast. Susie Mother and Clara came in very late this afternoon to help me quilt, Susie brought her great baby, who, I suppose, does not weigh less than twenty five pounds in her arms, and carried him home again after the prayer-meeting. Aug. 21. Friday. Mrs. Powell has been here most of the day-quilting. Eliza, Mrs. Packard and Mrs. McNeil were also here this afternoon. Mr. Powell and Josiah were also here to tea. In the Lodge this eve, we initiated two - Sister Clara and Mr. Pierson. The fatigue of visitors and tea, together with the fatigue of attending the Lodge, has made me sick. I have vomited since I came in from the Lodge and feel quite unwell. I feel sick almost every time I go out in the evening, and cannot go as far as the schoolhouse without riding. Therefore I do not attend the prayermeetings, and do not always go to the meeting on Sunday. Mrs. Powell has been proposed to join the Lodge, but will not until all the church members attend the prayer-meeting. Is this a good excuse? 1868. Aug. 22. Saturday. Clara slept with Ada last night and has been here today helping me quilt. Aug. 23. Sabbath. I have not felt able to attend church today. About noon, Messrs. Geo. Hunt from New York City and a friend of his, by name Mr. Fuller came to visit us. Mr. Hunt has sold the "Irving House" interest which he held in that City, and is now unsettled, looking about to find a place where to locate a home and Mr. Fuller is also looking around for the same purpose, as he is suffering from sum-stroke received in New York City, and does not wish to remain there Mr. Fuller thinks he shall bring his family to Cal. Mr. Hunt thinks of locating in Massachusetts. When we passed through New York City, Mr. Hunt was the proprietor of the International Hotel. Aug. 24. Monday. A very sudden and unexpected death occurred this morning at Mr. Holman's Ranch. Mr. Dearing and his wife (Emma Holman) were on a transient visit there and had been there since Saturday P.M. Mr. Dearing did not seem well through yesterday, and still he did not seem much sick. His wife thought him suffering from depression of spirits on account of the loss of a valuable and favorite mare, and did not converse much with him. At two o'clock he partook of a hearty dinner with the family, and when he rose from the table complained of feeling dizzy and heavy headed. About four o'clock he lay down for a nap, as he said, to see if it would not make him feel better. Shortly afterwards, he fell asleep and nothing could ever arouse him more. No one attempted to awake him until bed time, thinking he was getting a good sleep, and then he was unconscious and remained so until he died this morning, at a little before five o'clock. Dr. Locke and Atwell were in attendance, and think he died of congestion of the brain. Cause of congestion is unknown. What a warning to us to be "also ready," for in such an hour as ye think not, the Son of Man cometh." Messrs. Hunt and Fuller left us this morning. We gave Mr. Hunt all our photographs, and he gave us a little picture of Mount Vernon, framed with wood from some of the trees near the grave of Washington. Mrs. Powell came