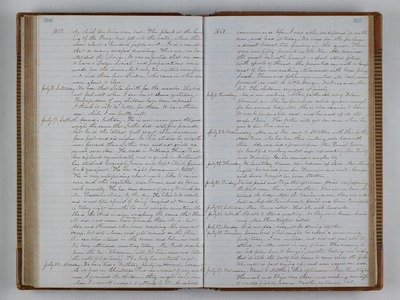 1868. by which ten lives were lost. The plank at the Landing of the Ferry - boat fell into the water, when there were about a hundred people on it. It is a wonder that so many escaped drowning. This eve, we have attended the Lodge. It was expected that we were to have a "Lodge Social" and preparations were made for the same, but only two visitors were present, and those from Linden, who came in when we were about to close. July 18. Saturday. We hear that Leila Smith has the measles. She did not feel well when I saw her at home yesterday. Perhaps some of my children have been exposed. I think it will be better for them to have them now, while I am pretty well. July 19. Sabbath. Howard's birthday. He is now nine years old, and weighs the same that Luther did – sixty five pounds, but he is the tallest of all as yet, as he measures four feet and six inches. In his studies he is rather more forward than Luther was, and not quite as much so as Ada. He reads in Willson's Third Reader has ciphered considerably and is quick in Arithmetic has studied Geography some and kept a Daily Journal for 2 years past. He has eight permanent teeth. He is very enterprising about work, likes to raise corn and other vegetables, ride horse, and do farm work generally. He has been desirous of going to work for Mr. Thaddeus Moore, by the day. He likes to be eccentric and is not often afraid of being laughed at. Hannah is today eight months old and weighs nineteen lbs. She is the third in size weighing the same that. Horace M. did, and none were forward than she is, but Ada and Howard, who were creeping. She does not creep, but sits alone, and gets around on the floor. She can also stand in the corner and balances well. We have attended meeting today. Mr. Powell preached from the text. "Whosoever will, let him come and take the water of life freely." The baby has no teeth as yet. July 20. Monday. We have had a birthday party on Howard's account. As we had no Christmas Tree on account of my sickness. I promised the children they might have one when I was well enough to attend to it. As school 1868. commenced before I was able, we deferred it until now, and had it today. We used for the purpose a small locust tree growing in the yard. There were over fifty presents on the tree. Ada received the most valuable present - a spool - stand filled with spools of thread. She presented me with a lamp mat of her our making - trimmed with brad finger Sarah, Elmer and John were invited, all had some presents, as well as little George, Wallace and Mabel. The children enjoyed it finely. July 21. Tuesday. Ada is now making woollen patchwork out of Delaine, flannel, etc. She has finished calico squares enough for her second bedquilt. She is also anxious to learn to work perforated card, and has used up all the scraps I have. Her father will get her more when he goes to San Francisco. July 22. Wednesday. Ada and Ida went to Stockton with their father Adder Brown, who has been there visiting rode home with them. Ada received a present from Mr. Daniel Brown, of a beautiful crockery match safe, representing Love, Parity and Fidelity. Ida also received a smaller toy. July 23. Thursday. We have today cleaned Ada's bedroom up stairs. Mrs. Huntington has arrived from San Francisco on a visit, George and Susie brought her from Stockton. July 24. Friday. Visited Josiah and Eliza this afternoon. Josiah was papering the front room. Clara was also there. This eve we have attended the Lodge. After the business was over, there was a debate on Capital Punishment - Josiah and Louis, Principals July 25. Saturday. Mrs. Brown called. Had the sick headache. July 26. Sabbath. Not able to attend meeting. As they went home, Susie and Mrs. Huntington called. July 27. Monday. Laid out Ada's bedquilt for sewing together. July 28. Tuesday. Susie had what might be called a swimming party today. I was invited, but did not feel able to attend, so Ada went in my place. The crossing is so bad from here to George's, neither boating nor riding that it took the party two hours to come across the field. The water is fast drying up, and soon wagons can cross. July 29. Wednesday. Went to Mother's this afternoon. Mrs. Huntington Hannah and Eliza were there, and making new style of worsted picture frames. Weather extremely hot.